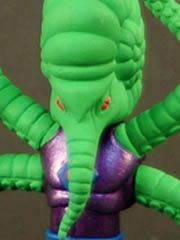 A couple of weeks after Comic-Con, the Four Horsemen are now shipping 2.0 sets, Alpha 2012 sets, and Cosmic Creators sets. They write:


Three of the Outer Space Men sets have just arrived in our warehouse and we're preparing shipping now.  About 30 sets of the re-issued Infinity Edition waves 1&2 shipped out today and more are soon to follow (shipments leave the warehouse every Tuesday). The Cosmic Creators: Four Horsemen Edition and the Alpha Phase wave 5 and Alpha Phase Deluxe 1 are also now in stock and are soon to be packaged and/or signed so they can be shipped out soon as well.
I haven't got my notice yet-- have you?  Leave a comment! Also read the whole story.
Posted by Adam16bit at 6:43 PM No comments:

With no new products planned, no new movie coming, and really nothing at all to report, Mattel devoted a surprisingly large amount of space to Major Matt Mason at San Diego's Comic-Con International last week.  Matt Mason, for those who don't know, is the line that came out as Mattel's Man in Space, which begat Mel Birnkrant and Colorforms to create and distribute the Outer Space Men as a compatible line of aliens.  (Mattel would eventually make an alien, but well, we know which ones are more fun.)

When I asked people at the booth, I was assured the items are basically just putting out feelers to fans, which is interesting as I assume the average Comic-Con goer would need Wikipedia to know who Major Matt Mason was, but you're good people and you know the connection to Outer Space Men already.

Numerous toys from the Mattel archives were out for the viewing, which is a real treat for someone like me who missed the Space Race and the toys it inspired.  This gallery at 16bit.com shows what Mattel had in their booth, but there was a surprise bonus item-- a Brawlin' Buddy of Major Matt Mason, presented as a fun concept with zero chance of coming out.  One was shown for He-Man as well.  These are mixed in with the WWE Wrestling coverage along with a few classic wrestlers which also won't be seeing production.

While you likely won't be seeing much more out of Major Matt Mason in the near future, it will get some coverage on this blog, especially if by some miracle Mattel hires The Four Horsemen to make the figures in a 3 3/4-inch compatible Glyos line.   I'd support the heck out of that, wouldn't you?
Posted by Adam16bit at 11:44 PM No comments: 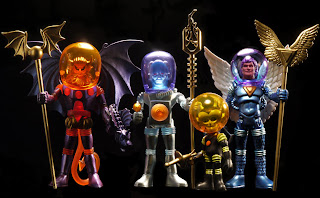 So there ya go!  Four more new guys.   Now go get a bigger shelf, because there will probably be some new Four Horsemen ones coming too.
Posted by Adam16bit at 3:56 PM No comments: 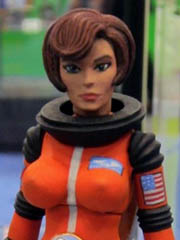 Go to 16bit.com's SDCC 2012 Outer Space Men coverage for the full galleries and tidbits, but here's a summary of what you missed in San Diego this past weekend.

Terra Firma (pictured) was on display for the first time in 3D form, giving you a look at how this figure has a lot more going on. Not only are there numerous pleasing bulges, but the deco seems to be amped up quite a bit as well.

Numerous custom figures were on display, but no new characters (or colorways) beyond those previously announced were shown.  As such, there's no sign of the rumored-but-not-a-rumor Pheyden or hints as to other convention exclusives for the year.