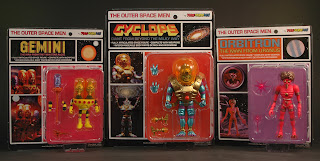 The Four Horsemen confirmed Waves 5 and 6 of Outer Space Men will go up for sale this Sunday and if history is any indication, the 9 PM EST launch is a good guesstimate - expect they'll be up by Monday morning.  The set is a fairly reasonable $50.  (For the record, the Alpha Phase and Galactic Holiday Phase were $50 each, while the Beta Phase was $65.)  Figures are expected to ship in late March.

After this wave, only 2 original OSM figures remain to be released (Gamma X and Colossus Rex will likely be starting as SDCC exclusives in July) with a few new characters like Jack Asteroid and Terra Firma expected to join them.
Posted by Adam16bit at 1:51 PM No comments:

Thousands of years ago, series creator Mel Birnkrant posted on a forum that the original Metamorpho did not quite meet his expectations. He was hoping the figure's helmet would be cast in a translucent white color and suggested you swap the painted figure's helm with a glow-in-the-dark one to achieve the desired effect to allow more light in to help the face glow while inside the helmet. A tricky innovation, to be sure, but Mr. Birnkrant is quite the lightsmith when it comes to his toys. He knows what light can do to make them look better.
[ READ THE FULL REVIEW ]
Posted by Adam16bit at 10:19 AM No comments:

If shiny does it for you, the 2.0 edition of Astro-Nautilus is worth your while. The staff is more vibrant and bluer than blue, while the figure itself has slightly purple-r skin and a shiny coating to his bronze space suit.
The figure keeps the exact same construction as before, with 4 arms jointed at 2 places on each tentacle. It's a great-looking, if top-heavy figure and probably one of two Outer Space Men likely to topple over if not balanced correctly. The head's pretty big, so be sure to set it up so if gravity does get to the best of him, he won't steamroll over your shelves. I've made this mistake before.
[ READ THE FULL REVIEW ]
Posted by Adam16bit at 5:24 AM No comments: 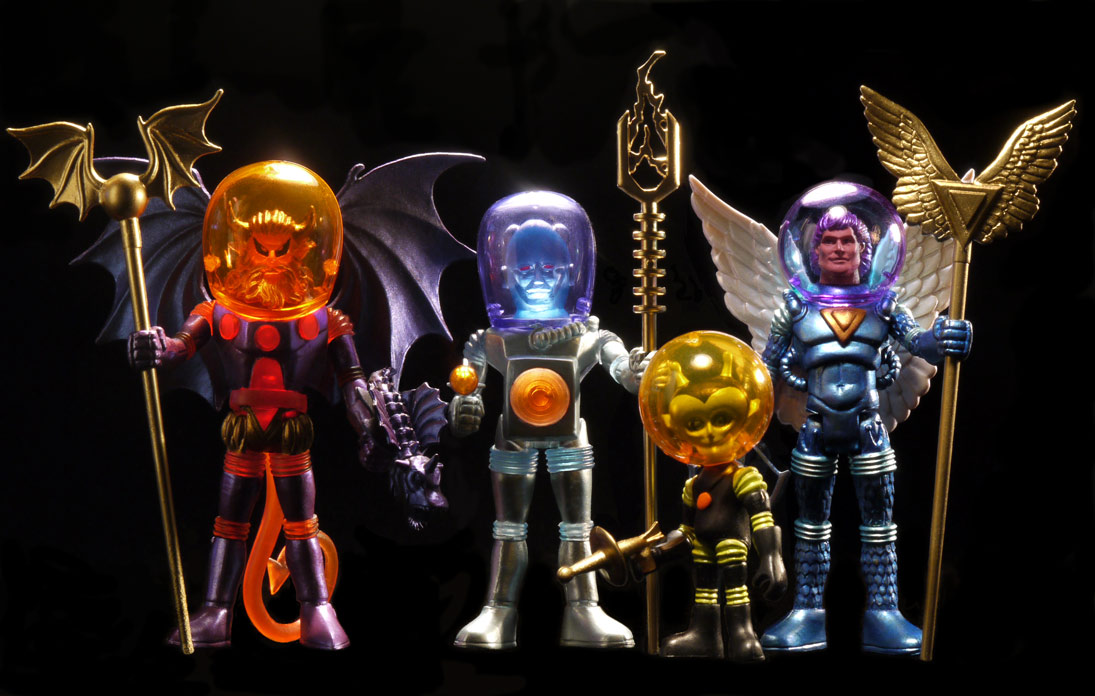 The new Mel Birnkrant Cosmic Creators Edition of the Outer Space Men are up to pre-order.  The "where" is a surprise!  TheOuterSpaceMen.com got the exclusive on this set, which is up for pre-order right now for $80.00. (My set cost $84.00 shipped.)

Since the site had no ETA, I sent a message to its owner, Mr. Gary Schaeffer.  He said that the figures should ship in Spring, giving April as an estimate.
Posted by Adam16bit at 4:56 PM No comments:

Part of the New York Comic Con Cyclops cost a lot more than the San Diego counterparts. That set was $50. This set? $65. No idea why. The figures were sold at New York Comic Con, and the remaining stock was split between Action Figure Xpress and Store Horsemen. They were $65 there too. There's nothing in the product to warrant the $15 increase over the Alpha and Galactic Holiday editions, but well, that's life. It costs more. Of the three figures in this set, Cyclops is the meatiest and provides the most options.
[ READ THE FULL REVIEW ]

At Toypocalypse 3: ExtraTOYrrestrial, there was a surprise batch of custom action figures!   I made this gallery at 16bit.com showcasing the many figures on display.

Also notable were some lighted figures, which were in awesome diorama boxes.  The video is hosted on that page. Click here to see them all.
Posted by Adam16bit at 9:05 PM No comments:

Please note there were additional custom figures, Power Lords, and other items on display.  We will be posting links and galleries as time permits, but we've got a meeting in like six hours so cut us some slack.
Posted by Adam16bit at 10:30 PM No comments:

If you can't get enough of Inferno, 2012 was a pretty good year for you! Not only was there a 2.0 redeco with transparent pieces, but this new one dubbed "Phospherno" is to action figures what the back of a Spencer's Gifts was in the 1980s. And presumably now, I don't think I can go in there without feeling creepy... not that it didn't feel creepy then. Where was I? Right, neon crazy alien man made of fire.
[ READ THE FULL REVIEW ]
Posted by Adam16bit at 5:33 PM No comments: 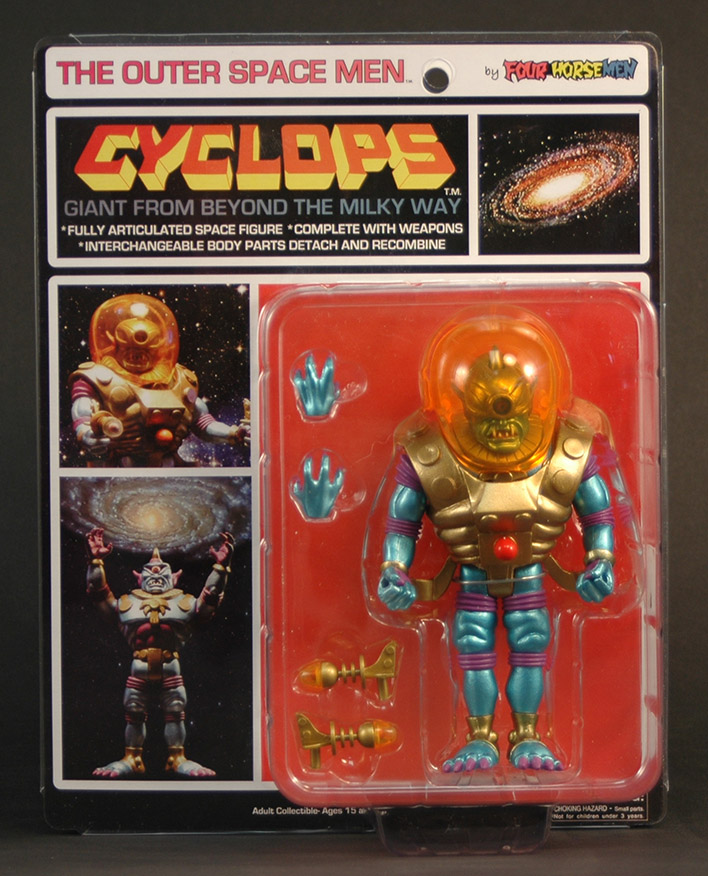 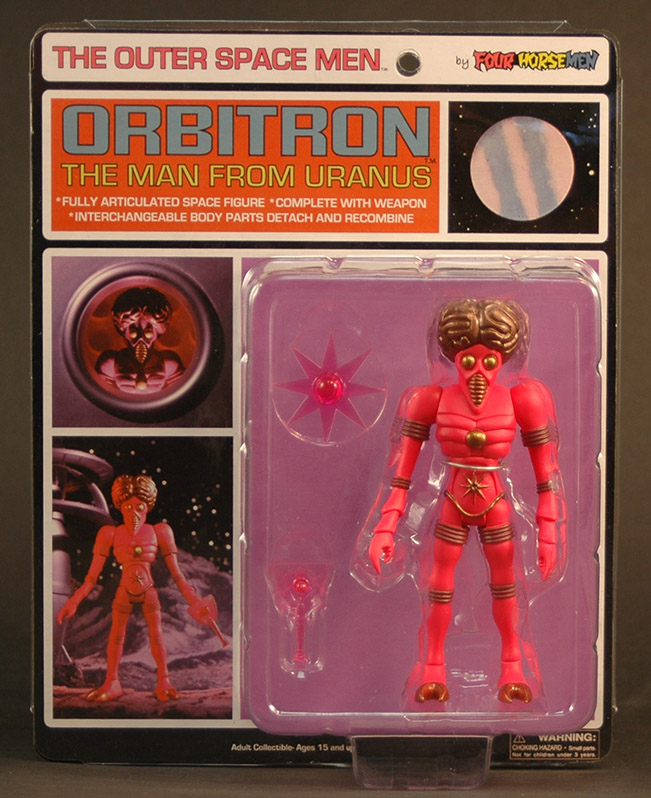 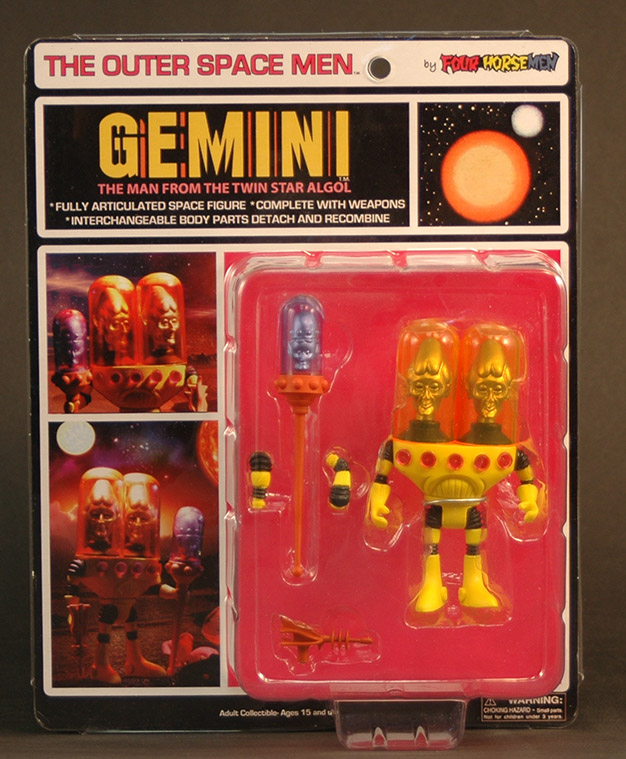 The Four Horsemen posted samples of the long-awaited third batch of carded Outer Space Men action figures to their blog!  No prices were listed, but they did confirm pre-orders would start after Toy Fair (which kicks off this weekend) with delivery in or around March 2013!  Click here to check them out.
Posted by Adam16bit at 11:32 PM No comments: