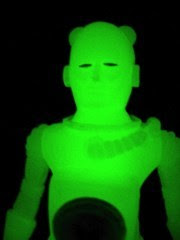 Why the break? Well, after doing this for about a year it became apparent that October 2011 needed more prep work than I could handle-- I had a trip to two of the major US toy companies, a convention in New York, and I'm moving into a new office all within a 3-week period. So let's continue with Electron+, the second glow-in-the-dark release in the Outer Space Men line after Metamorpho in 2010. As the first action figure of Electron+, it's worth noting that while the arms, legs, and lower torso were recycled, the figure is actually shorter than other figures in the line. [ READ THE FULL REVIEW ]
Posted by Adam16bit at 5:17 PM No comments:

Before you complain about the price, note that at the show, each PAIR of figures was $25, effectively making the quartet $50. (Obviously, shipping is extra, but that sort of makes up for the hotel and cabs and whatnot.)
Posted by Adam16bit at 11:48 PM No comments:

The Four Horsemen posted news on the prices and sellers for the 2011 Beta Wave figures. That's the good news. The bad news is that they're $25 for 2 sets at each of 2 booths rather than $40 for a set of 4 at 1 booth.