While the reveal hasn't started, we did some digging and found out there was a small announcement.  Toy Tokyo will be selling Gemini & Orbitron Outer Space Men figures at NYCC, but specifics are not available.  As the figures will be going on sale in about two weeks, it is unknown if they will be shown (or even really officially announced) prior to then or if this was meant as a surprise.  Either way, click here to see the only info released thus far.
Posted by Adam16bit at 12:09 PM No comments: 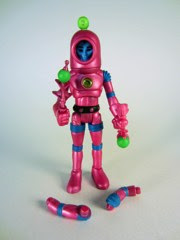 Yet another version of Metamorpho! Dubbed "Megamorpho," this figure takes a cue from the neon end of space which vaguely recalls the aliens of Major Matt Mason as well as numerous toys of the late 1980s and 1990s. A radical departure from the previous painted versions of this figure, Metamorpho is cast in a metallic pink with bright blues and greens that are arguably the very thing people are complaining about when they call something "too neon." This means, of course, that it is perfect.

With about 20 parts when fully disassembled, this figure is more or less the same thing you've come to love and expect. The key difference, of course, is the insanely awesome paint job that should do a fine job of blinding your friends when they walk in the room. This time around, the "alien" head is blue, the "ape" head is green, and the "reptile" head is pink. His "button" on his chest plus the knob on his helmet are clear green, with the accessories rendered in the same pink plastic with painted green elements.
[ READ THE FULL REVIEW ] 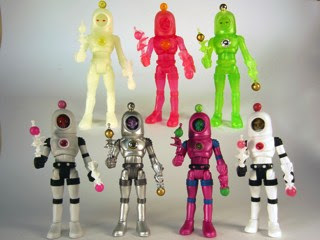