Surprise everyone!!! As an added bonus the Cosmic Radiation OSM figures will have a separate bag of glow-in-the-dark weapons and accessories have fun everyone I hope you enjoy. #outerspacemen #melbirnkrant #actionfigures #spacetoys #sciencefiction #cooltoys to #gemini #horroscope #inferno #jackasteroid ##mystron #ohpromatem #orbitron #terrafirma #xodiac #astrodite #glyos #prototype #testshot #starwars
A photo posted by Gary B Schaeffer (@the_outer_space_men) on Aug 26, 2016 at 9:14am PDT


A note: at this time we don't know how/when/if these will be distributed online or outside the conventions.   One may make assumptions but nothing was confirmed just yet that we have seen.   Also, the only two Cosmic Radiation figures with dates are Gamma-X and Colossus Rex, both of which will be in the hands of New York-based convention-goers during the first two weeks of October.
An update (8/29/2016): some fans who ordered Colossus Rex 2.0 are reporting getting some of these accessories in the box.  Spiffy! 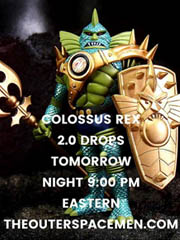 They're back, again, Friday night!  In about 20 hours, you can get Colossus Rex 2.0 - the bluish variant.  Check it out on the Instagrams.

The official Outer Space Men account also teases a couple of other figures and word on them in 12 hours.  I'm all ears.   The guy to the right goes on sale Friday night at 9:00 PM Eastern over at TheOuterSpaceMen.com.   Word has it he's $30 and if you saw the 1.0 version's going rate on eBay, $30 is quite a bargain.  (If you've followed inflation on toy manufacturing in China over the last few years, it ain't bad either.)

Anyway.  More are coming, this one's first, keep an eye on this space for more, don't ask why just buy buy buy, etc.   I'll have a review up as soon as time and space permits.
Posted by Adam16bit at 10:20 PM No comments:

The Outer Space Men are returning!  (Again!)   The last new wave of painted figures was a huge hit, with the 2 classic characters - Colossus Rex and Gamma X - selling so well that they will now cost you a lot of money.   (And that's assuming you can find them for sale.  Good luck.)

The fine folks behind the line are reissuing them with some improvements, along with a glow-in-the-dark Colossus Rex for the very first time. Gary Schaffer was kind enough to reach out with some details... and unrequested commentary added by yours truly. 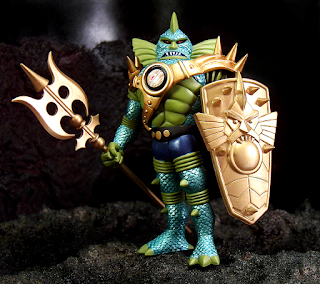 Colossus Rex 2.0 - this will debut on the official Outer Space Men web site, and will also be sold at Star Trek Mission New York (September 2-4) and also New York Comic Con (October 6-9).  The figure is slightly closer in the rich color of the original Colorforms release nearly 50 years ago, but includes gold - rather than purple - accessories.

If you missed the original figure, this is a much cheaper alternative to the secondary market.  If you didn't, it's different enough that you may wish to get one anyway.   $30, carded - this figure will feature new graphic design and new logos on the packaging as the Four Horsemen are no longer selling these. 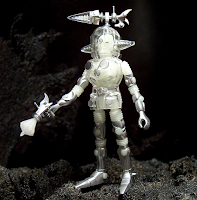 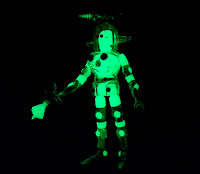 Gamma X Cosmic Radiation - This will debut at Star Trek Mission New York (September 2-4).  The original Infinity Gamma X was covered in a light layer of glowing paint, which didn't glow fairly well.   It was colored similarly to the original prototype figure, but didn't glow well.  The new Cosmic Radiation edition is cast in glow plastic and looks like it will brighten the night.   It's a worthwhile upgrade.  $25, bagged.

Colossus Rex Cosmic Radiation - The New York Comic Con exclusive for The Outer Space Men will bow October 6-9.   This mock-up shows silver detailing added to the figure with silver accessories.  (Silver accessories were previously made available with the Ni Stuff handmade Galactic Holiday 2013 figures, and also as a set from the Four Horsemen Store.)   $25, bagged.

At press time the only figure we know will be sold online is Colossus Rex 2.0 - I'll post more as updates become available.
Posted by Adam16bit at 4:48 PM No comments:

Did you know that The Outer Space Men toy line turns 50 this year? It's true! The space race got people really excited about space and space toys, until we landed on the moon and everybody got bored. Because of that, the original prototype figure that led to White Star Mystron was never produced - but we got little versions of him now for a fairly nice price. If you've been following these reviews - and I've only got a couple left to write - you no doubt know that a lot of the early figures share a ton of parts, which coincided with lower pricing. Everybody won! ...initially. This Mystron was in a Comic-Con exclusive from 2013, after each figure had a minimum of 4 or 5 releases in various colors. The higher prices and reduced paint was sort of a slap in the face. I still bought it - and I basically like it, even though it'd make a better custom base than a play or display toy. Also I get to say that I own a White Devil action figure.
[ READ THE FULL REVIEW ]
Posted by Adam16bit at 12:30 AM No comments: