One of the very last releases for The Outer Space Men before its end - which, it turned out, would just be a 2 1/2-year hiatus - was a sack of Chrome Accessories created to go with some customized figures for a Galactic Holiday Phase just a few months prior. These were extras - so if you wanted some silver weapons to outfit your figures for any custom reasons, here you are. The weapons for Ohpromatem and Horroscope match those of Metamorpho and Xodiac's 2010 Galactic Holiday figures, respectively - if you got the silver ones. Gold ones were sold as well.
[ READ THE FULL REVIEW ]
Posted by Adam16bit at 12:49 AM No comments:

The gap between the first and second The Outer Space Men Onell Design specials was five years. Five years. Thankfully Alpha 7 Zekroyas was only 3 months after the last one, bringing the man from the red planet back as a figure that's not only red, but has a unique color layout. It's not just a color-swap, but there are significant changes to where you'll find paint this time around. If you've been collecting this line for a while you may have six (or seven, if you dig variants) and more or less know what to expect. This is the first wholly original painted version to see release in quite some time, as the original Alpha 7 [FOTD #388] was based on a toy from the 1960s, and Alpha 11 [FOTD #744] was inspired of a contemporary - and ultimately unreleased - redeco. The Zekroyas version from Onell Design is a match for the Crayboth and Quallerran figures released at the same time, so they're siblings in a way. I'm super keen on figures painted like the Outer Space Men so I picked those up, too.
[ READ THE FULL REVIEW ]

When the announcement of new glowing "Cosmic Radiation" figures came up, I commented that these would be in addition to three existing glowing figures. I was told that the first Gamma-X [FOTD #939] didn't glow, but it does - just not very well. Regardless of the confusion, it's telling because it proves that Cosmic Radiation Edition Gamma-X 100% needed to exist. The original 2014 figure was a top-notch update of the original Colorforms prototype, matching the color and everything. It just didn't match the original action feature - that is, to glow in the dark. If you've bought both figures, you've got one that looks right and one that looks right, and this new 2016 convention exclusive is actually $1 cheaper than its dim-glowing counterpart. I'm not saying it's 100% better, but it's different enough that I think you've got reason to potentially buy both if you're so inclined.
[ READ THE FULL REVIEW ] 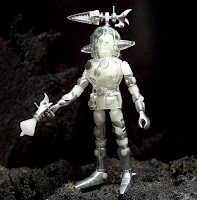 A full review of this figure will go live next week, so come back for that.  And then you'll probably never hear about this one here again.
Posted by Adam16bit at 6:06 PM No comments: 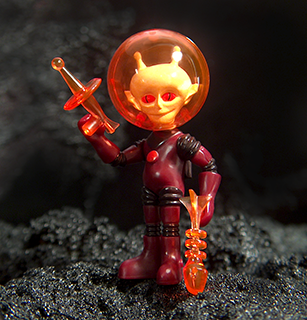 Right now - RIGHT NOW - the Onell Design shop has this Zekroyas Special Edition Alpha 7 Outer Space Men figure crossover!    He's $12 (cheap) and will probably be sold out before you see this post.

Click here to order yours.
Posted by Adam16bit at 6:38 PM No comments:

Since taking a nap in 2014, it seemed that the Outer Space Men toy line was done. Well, it seems that with Colossus Rex 2.0 the manufacturing duties are being handled by the licensors, rather than the Four Horsemen, although the original packaging templates and figure toolings are brought back to make a similar-but-different release. If you bought the 2014 original, good on you - it got expensive on eBay and Amazon if and when one showed up for sale. Based on some rough numbers at least 1,000 are estimated to exist of the original, and most fans ultimately just wanted the painted ones - so thankfully Gary Schaeffer brought this one back with a bluish deco variant. If you just want a painted Colossus Rex, either version of this 5-inch-and-change titan should be just fine for your shelves.
[ READ THE FULL REVIEW ] 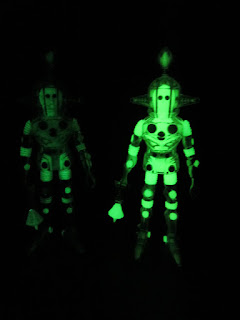 UPDATE! We now have confirmation it will go up for sale on TheOuterSpaceMen.com August 9 at 9:00 PM Eastern.

If you're in New York City right now, the Outer Space Men team has a booth at Javits Center for Star Trek Mission New York.   There, you can pick up the new Colossus Rex 2.0 ($30, review next week) and/or Cosmic Radiation Gamma-X ($25, review the following week).   You might be asking "Well, is it worth it?"

To the right, you'll see two Gamma-X figure.  On the left is the bone-colored 2014 Infinity Edition version, sold carded by the Four Horsemen for $26.   To the right, the 2016 convention bagged exclusive which glows like crazy.

I put both under a black light bulb to charge them up, and the difference is pretty striking.  This is an unmodified photograph, with no adjustments to the brightness settings.   If you love things that glow, get the new one this weekend and/or if/when it shows up for sale on TheOuterSpaceMen.com. 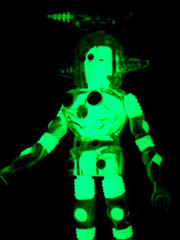 This weekend!  Cosmic Radiation Gamma-X is on sale in New York at the Star Trek: Mission New York convention.  $25, booth #426, ask for Gary.   It's $1 cheaper than the previous Infinity version.

At this time we don't know when he'll be sold online, so get it now when you can - unlike the 2014 release, this one is cast in glorious Onell Design-quality glow-in-the-dark plastic so it will turn your dark room green with envy.

And yes, we're gonna have a review up in a couple of days, because we love you and we love this toy.  In theory.  You'll have to read the review to know for sure.
Posted by Adam16bit at 10:31 PM No comments: