The original Astro-Nautilus is a big part of why I was so fascinated by these figures, and this new "Neonautilus" works well to remind me why. While not cheap, it's much cheaper than the previous Cosmic Creators incarnation and vastly different in appearance. It keeps the same mold, but by applying green skin and a purple suit, it feels like it came from a completely different era.
[ READ THE FULL REVIEW ] 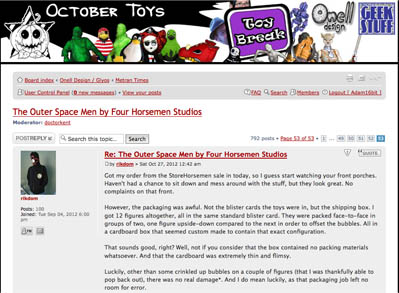 Since the Fantastic Exclusive official Four Horsemen forums have been shut down for a while, you might be looking for somewhere to talk up Outer Space Men.

Might I suggest this thread over at October Toys?  This is on their nicely trafficked Glyos forum, which has a ton of nice people and most of the posts here are pretty thoughtful, just like over at the old forums.  Give it a shot, OSM-fans!

There hasn't been much news on this line lately.  At this time we don't know if Mel Birnkrant's Cosmic Creators figures for 2013 will show up at the next Four Horsemen Exhibit, or when the 2012 Infinity Edition characters will go up for pre-order.  But hey, maybe we'll know more around Toy Fair next month.  I'll be in New York with my camera again, so stay tuned for more!
Posted by Adam16bit at 5:32 PM No comments: