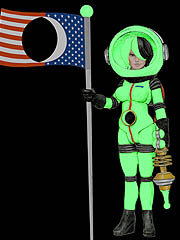 Luna Eclipse and Zero Gravity both come from the dark side of the moon, and feature glowing suits and glowing facial elements.  Luna's hair partially glows, and so does Zero's teeth - designer Mel Birnkrant wrote: "I visualized a big glow in the dark grin, which is something that, in my very limited involvement with action figures, I have never seen."

No release date was given, but these are being tooled along with the long-awaited Astrodite - which we first saw around February 2013.   A four or five year wait is nothing - about half of the Glyos The Outer Space Men figures we've received thus far were based on designs from the 1960s and didn't get produced until the 2010s.   Five years is nothing.
Posted by Adam16bit at 9:38 PM No comments:

It's easy to forget, but from 2010 to 2013 each and every San Diego Comic-Con and New York Comic Con had at least three exclusive The Outer Space Men action figures. Now you might see some at a New York show here and there, but the sets you could set your watch to are long gone. One of the last sets to be sold at New York Comic Con included a White Star Ohpromatem, at least sixteen convention exclusives in 2013 - easily one of the most prolific years the line had ever had for this kind of thing. The figure shares tooling with Terra Firma and Horrorscope, plus a few of Metamorpho's parts for good measure. It's a nifty figure, combining the cartoon proportions of Playboy's comic panels with nightmares from outer space. It's also largely unpainted.
[ READ THE FULL REVIEW ] 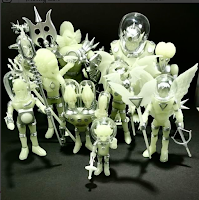 While I got an email today saying Cosmic Radiation Outer Space Men Alpha 7 was available Friday, this link in the store appears to be active now.  He's $20 - and I got one early, and it's awesome.  Due to travel I can't have the review up right now, but it glows, it's cool, and I love it.

As far as  I know, this is all that is planned for now - the girls and the two humans aren't yet announced as glowing figures.
Posted by Adam16bit at 9:05 PM No comments: