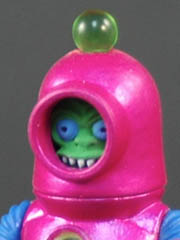 Mostly pink and green, the original four figures are coming back with snazzy new paint jobs and as of yet unknown pricing.  For now, though, go check 'em out again.  They first debuted in February and the first official photographs still look really slick!
Posted by Adam16bit at 7:42 PM No comments: 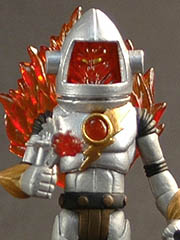 They're better! Are they better enough?  The Four Horsemen revealed new takes on Astro-Nautilus, Metamorpho, Inferno, and Xodiac, and dang if they aren't all pretty neat.

Inferno (pictured) now has clear plastic parts which look closer to the original prototype bendable figure.  Astro-Nautilus has a darker trident and newly-colored skin.  Xodiac's accessories are recolored... the figure was pretty much perfect before as it was.  And Metamorpho has a lot more clear plastic and a newly-colored sorta-translucent helmet, based on Mel Birnkrant's own customizations shown on his web site a year and change back.

All in all, interesting stuff.  Be sure to take a look!
Posted by Adam16bit at 7:33 PM No comments:

The smallest member of the Outer Space Men, Alpha 7 also has the distinction of being one of few figures in the line whose appearance taps in to an existing cultural portrait of life on Mars, specifically "little green men." The painted version of the figure looks like he stepped right out of the earlier part of our time exploring space, before we had a better handle on what was (or sadly wasn't) out there.
[ READ THE FULL REVIEW ]
Posted by Adam16bit at 10:41 AM No comments: 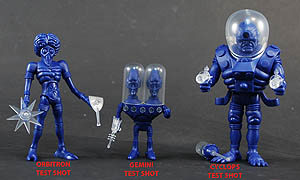 It's that time again! Comic-Con is just around the corner and the Four Horsemen have revealed the Alpha Phase Outer Space Men for 2012! Sort of. They're teasing us with some gorgeous test shots, and confirming that this year we're getting clear red Orbitron, clear yellow Gemini, and clear light blue Cyclops (and, interestingly, not the previously shown Colossus Rex.)  Well, I'm excited!  They say preorders will be soon on these and other new releases.
Posted by Adam16bit at 5:44 PM No comments:

My favorite overall design in this wave of Outer Space Men is probably Electron+. The execution, not so much-- the poor fellow can't sit down to to a chest piece hanging over his leg joints, so he's forced to stand for all eternity. Since his packaging mentions his race is made of energy and can return to that state at will, I'm assuming that means he probably won't be too uncomfortable hanging out on my shelf between now and the time I drop dead at 48, shortly after being featured on Hoarders.
[ READ THE FULL REVIEW ]
Posted by Adam16bit at 7:20 AM No comments:

The Four Horsemen's site updated with a ton of new info. Some of which, frankly, is annoying. But here it is.

1. 2010 Figures Getting 2.0 Treatment. So you know those figures you bought in 2010 in like four different colors to support a small line, and then paid $125 for in February in a new paint job? Well, they're getting the "just different enough to make you mad" treatment in time for Comic-Con 2012. They say: "We've gone back in and made some minor tweaks and alterations to the paints that will bring these guys closer to Mel Birnkrant's original vision of the Outer Space Men. The changes will be minor, but sure to be appreciated by true OSM fans." To which I say: that is where you are wrong.

2. 3 Figures for SDCC. Orbitron and Gemini will be made, and Cyclops will be the first "deluxe" figure. Which probably means it'll cost 20% more. (But eh, it's cool, and it has some sweet, sweet gear.) As always, these are the "Alpha Phase" figures and will be sold at the show and online.

3. More Cosmic Creators Series: Four Horsemen Edition Outer Space Men are on the way. Odds are these are the same ones highlighted at the Futuretro exhibition, although no prices were alluded to so it's unknown if these will be priced like normal figures or at a triple markup just yet. As with the last batch, these will be a one-shot deal and signed.

In short: things are moving along nicely, but the honeymoon phase is definitely over.
Posted by Adam16bit at 10:09 PM 1 comment: