When toy lines slow down, and display space dries up, things stay in a box for a while. I've had Cosmic Radiation Ohpromatem since some point in 2018 - but didn't open it until about three weeks ago, in part because I was holding back on a bunch of White Star and Cosmic Radiation figures to talk about when we got new molds or new painted figures. Turns out, that didn't happen - other than Bluestar figures and a couple of big Sofubi special edition custom jobs, the line has been more or less dormant. Which is unfortunate, we were shown a jumbo sofubi Astro-Nautilus and told to expect some more things for the lines 50th anniversary. Well, at least we've got mountains of pretty great 3 3/4-inch figures to enjoy!

Who Wore It Best? Inferno (2010) plus The Human Torch and Firestar

It seems like a good time for The Outer Space  Men to put on costumes for Halloween!

While there's not much news going on in The Outer Space Men line these days, there's still plenty to like - old figures can be had for varying levels of "not bad" on eBay if you're lucky, and they're still one of the more fun lines to play around with if you have more toys.  I started picking up some of Hasbro's Marvel Legends 375 figures - the "Kenner" branded ones from 2020-present - and was thinking "hey, there's a photo I would like to see." 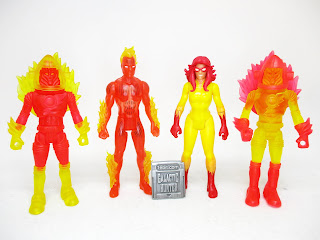 The Inferno Alpha Phase and Beta Phase figures were red and yellow respectively, so I swapped some parts around to give you this no-doubt thrilling photo.

It's worth noting that the Inferno figures - from 2010, so they've both just turned 12 - are starting to feel a tiny bit tacky, a little sticky, as often happens with some plastic figures as they age.  Usually as they off-gas or whatever mold release oils work their way out, you might get some sticky or slick old figures - especially 1980s or 1970s Kenner figures.  I've generally found wiping them down with a damp cloth makes them feel like new again and so far, I've never had to go back and do it a second time.

Also, hi to Gary and Mel, everybody hopes you're all well and maybe working on some other cool thing to share with us if you're so inclined some day.

Email ThisBlogThis!Share to TwitterShare to FacebookShare to Pinterest
Labels: Pictures

Your local Walmart is loaded with dirt-cheap USB LED light strips.  On Saturday, I picked up the LEDeez Black Light LED Light Strip for under $6.  I hooked it up to a power bank and waltzed around with it to see how it did - it's good! It's not as bright as a good UV Light Flashlight, but it certainly gets the job done. 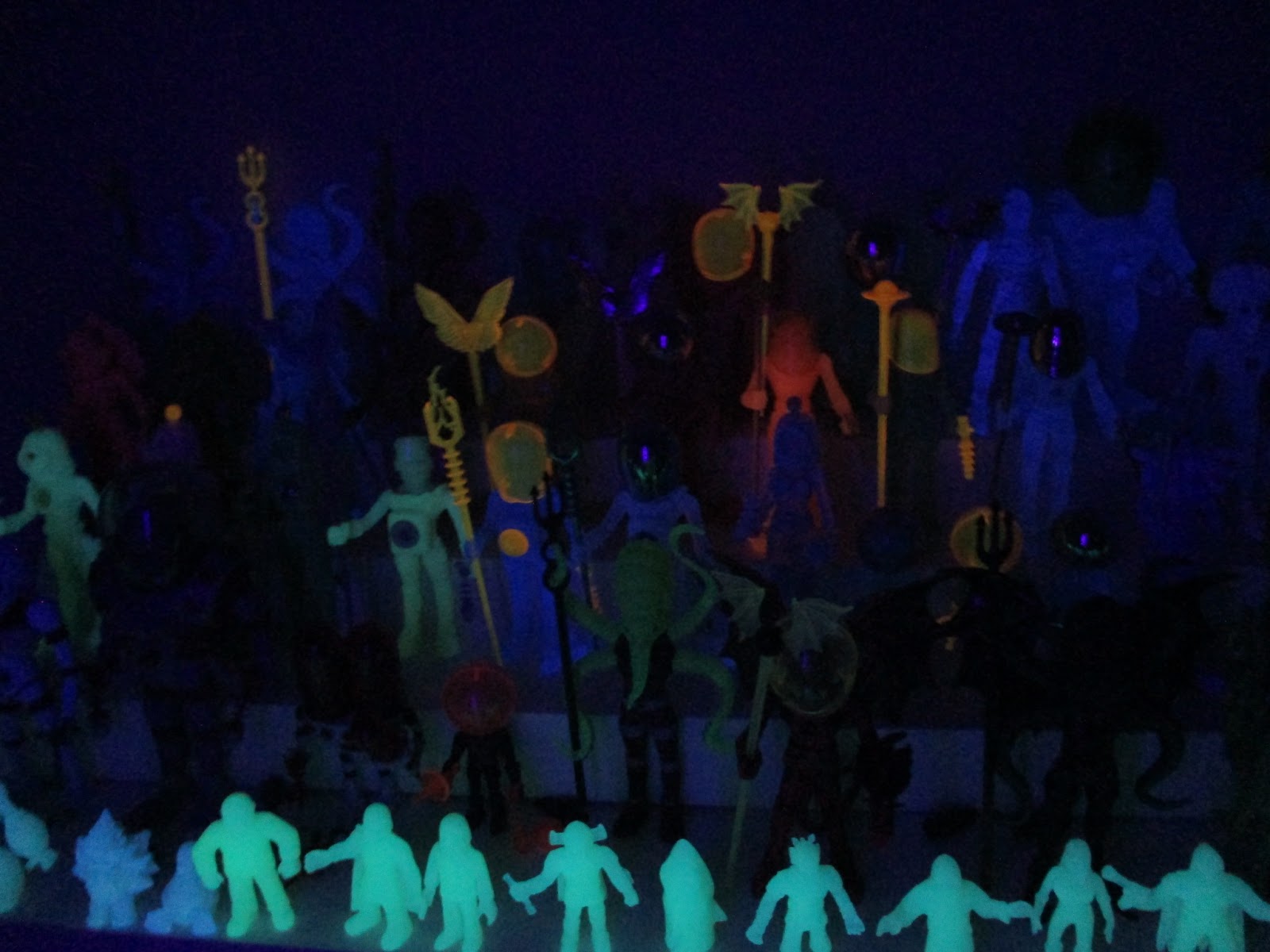 Here it is near some 2010-2012 The Outer Space Men Alpha, Beta, and Holiday Phase figures as well as some of the Onell Design crossovers.  (Remember those? Man Onell Design did some gorgeous colorways and I hope we see a few more.)  Way in front are some of the Sucklord's glow-in-the-dark S.U.C.K.L.E. figures and October Toys' O.T.M.F.G. figures.

The bright orange Xodiac that looks like he's glowing is just the SDCC Alpha Phase edition, which, to this day, is still an absolutely beautiful action figure. (And it was $10! That was even a pretty cheap price back then.) 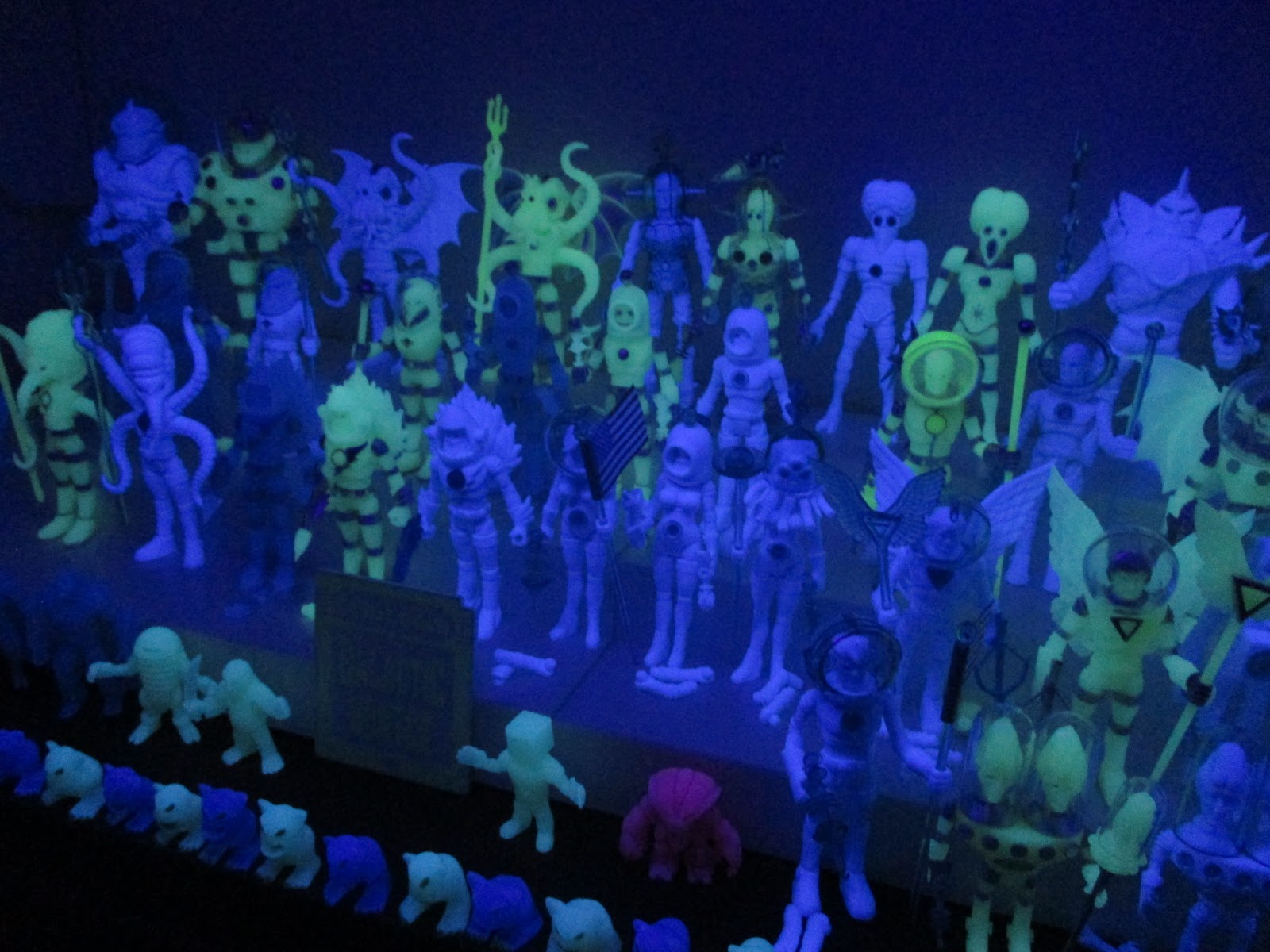 On this shelf, you can see Cosmic Radiation (glow green) figures, White Star figures, and the only four Bluestar figures I have so far.  The blue glow Bluestar figures don't react well to this particular black light strip, and while they do OK with a UV flashlight, they really do best after being exposed to sunlight. And by "do best" I mean "can glow for over 8 hours after a good Sun charge."  The Whitestar figures do shine quite nicely under the light too.

Despite some work being done on the line, there hasn't been much news - most if not all of the Bluestar figures have come out (and some have sold out once or twice), and we've seen no news on the new giant vinyl Astro-Nautilus in some time.  New painted colorways were mentioned/teased/winked about for the line's 50th anniversary, but that has come and gone.  I don't know if The Outer Space Men have much of a future beyond customs and the recent NFT releases, but I'm crossing my fingers for at least a few more painted editions - or unpainted solid color editions - before the molds are retired. (Can I just buy a run? Can I afford it?  You know where to reach me, Gary and Mel and/or Matt.) 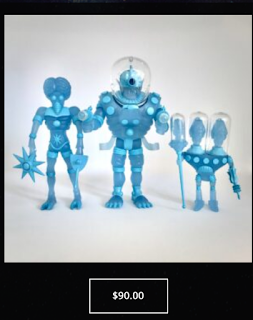 Gary from Team Outer Space Men sent us a note that the 3-pack of Cyclops, Gemini, and Orbitron are coming! And are sadly getting a price increase.  The 3 big beefy blue glow guys will set you back $90, but there's a lot of glowing plastic in there.

You can find more pictures on their Instagram here. 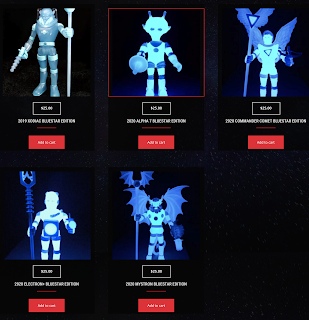 As the fates foretold, Wave 2 of the Bluestar Outer Space Men are live now.  (It is uncertain if they are in-stock or a pre-order.)   Like the last batch they're $25.00 each plus shipping, and come with a wide array of accessories.

The glow-in-the-dark blue plastic is incredibly bright when properly charged, and the wave one figures turned out really well.   If you are so inclined, you'll probably love them.  The Glyos system works great for these 3 3/4-inch scale figures, plus things that glow in the dark are generally always nice.
Posted by Adam16bit at 11:29 PM No comments: 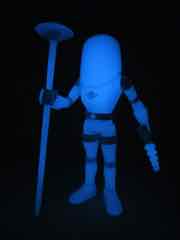 Who loves more of the same, but different? Bluestar Xodiac brings you the same basic color layout of the Cosmic Radiation edition, but now with blue glow plastic and light blue painted highlights - and two helmets. You get a bit more here than a basic Xodiac, but it also costs more than double what the figure did in its debut 10 years ago. Is it worth it? If you like blue glow, yes, yes it is.
[ READ THE FULL REVIEW ]
Posted by Adam16bit at 12:00 AM No comments: 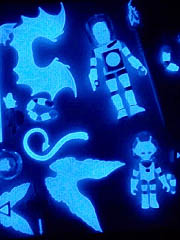 The Outer Space Men relaunch kicked off 10 years ago as a sort of perfect mashup of Glyos construction and 1970s Kenner articulation and personality.  And it's still going!  On Twitter, The Outer Space Men crew previewed the next batch of Bluestar figures.  These blue glow-in-the-dark figures are updates of the 2011 crew - Commander Comet, Mystron, Electron+, and Alpha 7.  This is the first we've seen them in-the-glowing plastic.
Click here to follow them on Twitter!