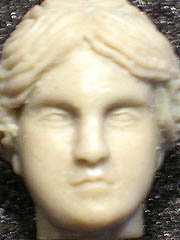 It has been a few years since the figure was revealed to a mostly ambivalent public in New York, but hey - she's coming!  Astrodite is the Woman from Venus, and was the only figure shown to the public which hadn't been produced.  It looks like that may change - the official Outer Space Men Instagram showed a couple of shots with the caption "She is coming!" 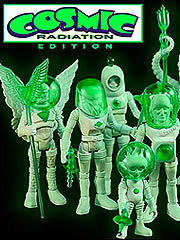 Announced via Instagram on July 2, Cosmic Radiation Edition Outer Space Men are coming - somewhere, on some day roughly 3 weeks from now, at an undisclosed price.

For the paranoid among us, three weeks from the post date would put it squarely during San Diego Comic-Con, thus being something of an issue for those otherwise occupied with travel and feat of fast sell-outs.  Hopefully it won't be until after the show, but one can never predict these things.

This selection of 8 figures is the same as the first White Star box - Commander Comet, Xodiac, Metamorpho, Alpha 7, Electron+, Astro-Nautilus, Inferno, and Mystron.

For those keeping track, there have been three figures which boast glow-in-the-dark features previously.  Metamorpho in 2010 was cast in a pale glow plastic with yellow clear accessories.   Electron+ was made in the same glow colors but with purple accessories in 2011.  In 2014, we got a Gamma-X with painted glow over its frame, but the quality of the glow was pretty rotten.
Posted by Adam16bit at 9:58 PM 3 comments: