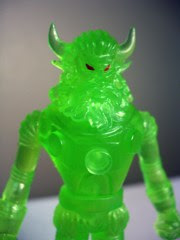 Because of Toy Fair in New York, figures like Mystron got written up a long time before they were posted-- this is what we call planning ahead. As the third release of the character, and technically the third pre-release as the painted version had yet to ship as of his release, this particular Mystron was cast in a bizarre green color. I say "bizarre" because, while appropriate for the Christmas season, I generally don't think of "green" when I think of "the center of the Earth" or, more specifically, Hell. Brown? Sure. Red? Absolutely. Smokey grey? Yes. But not green, even though it turns out the ghostly color really works well for this devilish creation.
[ READ THE FULL REVIEW ]
Posted by Adam16bit at 12:41 AM