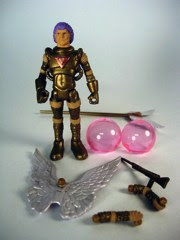 Surprise, thy name is Commander Comet. After three sets of clear prepaints and a round of price increases, combined with a delay of just over a month after the promised short pre-order ship date (originally scheduled for late December 2011, it didn't ship until the end of January 2012), it seemed like we were going to be in for a rough batch of figures. I'm happy to say that despite the longer-than-expected wait and $10-per-set increase, the figure is still worth owning. The figure looks wonderful in person, and while it doesn't hold up to the insane scrutiny of my camera's macro setting, it's gorgeous in person to the human eye in normal lighting. The eyes are damn near perfect, with just the right positioning of the iris that he doesn't look nutty or stoned. He just looks like an awesome action hero, which I would've assumed might be difficult from the purple-haired gold-suited Man from Venus.
[ READ THE FULL REVIEW ]
Posted by Adam16bit at 12:44 AM