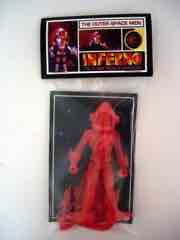 Before Hasbro decided to make a number of figures painted to be on fire, Colorforms and Mel Birnkrant pioneered a concept for a space man made of flame. Made in a tiny run of about 300 (reportedly), the Four Horsemen Outer Space Men Alpha Phase Inferno the Flame Man of Mercury Comic-Con Exclusive Action Figure has an unreasonably long name. The very first release of this figure, this translucent red figure is really bright and one of the best figures in the line. Subsequent releases were many included a fully-painted release, clear blue and clear yellow figures were also cranked out. At this time there are no known plans for additional releases of this mold, so complete collections will have four (five if you count variations) in them.
[ READ MORE ]
Posted by Adam16bit at 7:50 AM