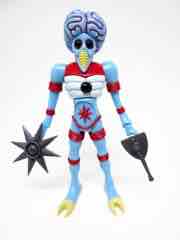 Long pauses are as much a part of The Outer Space Men as space itself. The original line took a nap after its 1966 debut until 2010, and every year we'd see a surge of freshness around July with the line usually being over and done with by January until the next July. Selling out faster than you can say "give Uncle Scrotor a hug," Orbitron Diversus was the last new releases were the final "Infinity Edition" figures from February 2014. In that time, the rights to The Outer Space Men reverted back to the brand's owners, which means you're probably not going to see a heck of a lot of new sculpting but you might see more new releases now that the ball is rolling again. I hope. I mean, it's been 50 years - toy nostalgia usually peters out for most adults before they turn 40. Onell Design's new crossover Orbitron takes cues from its original inspiration - notably the Metaluna Mutant from This Island Earth.
[ READ THE FULL REVIEW ] 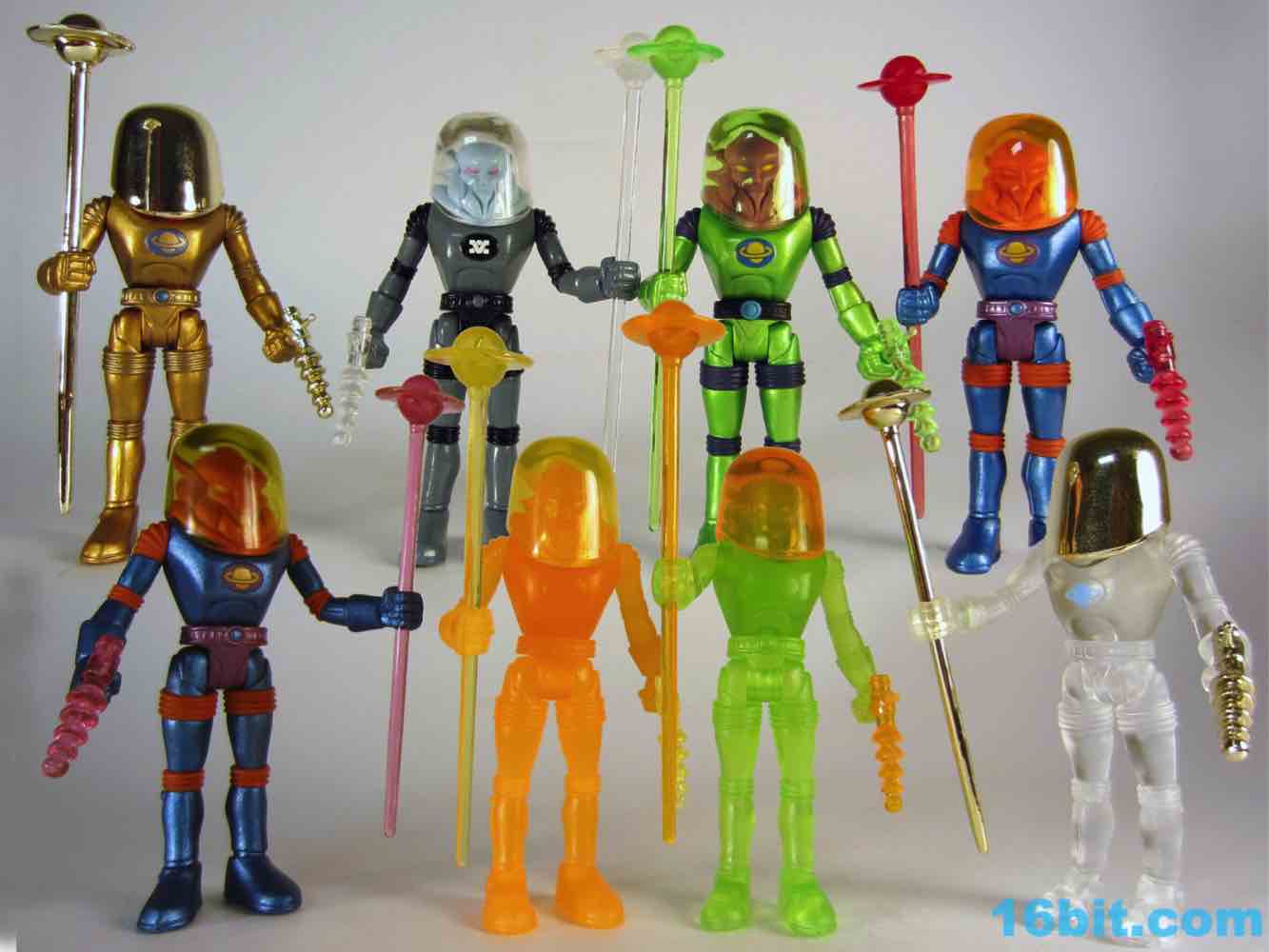 Xodiac!   Man of Saturn, born of Outer Space!   The Outer Space Men had a significant number of repaints, most of which were interesting, and also there was a White Star version.   The only one you don’t see in the above photos is the Galactic Holiday variant - there was a gold accessory version (pictured) and a silver accessory version which I do not have.  I hate that kind of variant, but hey, if you’re sellin’ I’m buyin’.

This is a remake of another figure from 1964, which was a bendable figure like Gumby and Major Matt Mason.  The newer, smaller figures from The Four Horsemen (and the Glyos factory) can pop apart at each joint, allowing you to swap arms, legs, heads, and other pieces to your liking.  It’s fun in practice, great for customizers, but if you’re just a guy with a lot of toys it isn’t terribly useful in the long run.   But if you ever wanted to see what someone looks like with mismatched pants?  It’s handy.  It doesn’t hurt anything. 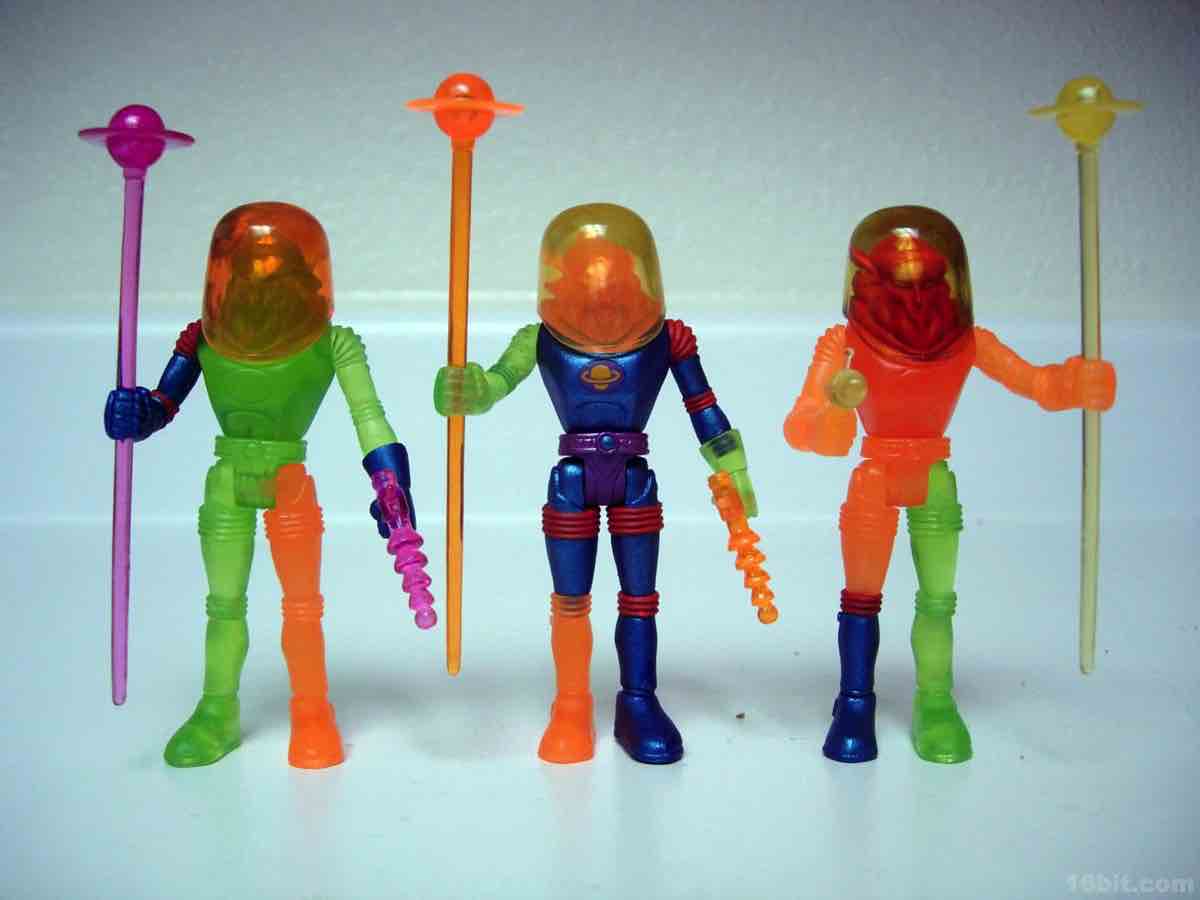 With 9 distinctive mass-produced versions (plus a weapon variant) Xodiac has more variation going on than pretty much everybody.   At Comic-Con in 2010, he was one of the first four figures with his clear neon orange Alpha Phase release.   I have a hard time picking a favorite, as there are so precious few action figures which include the planet Saturn impaled on a stick for my amusement. 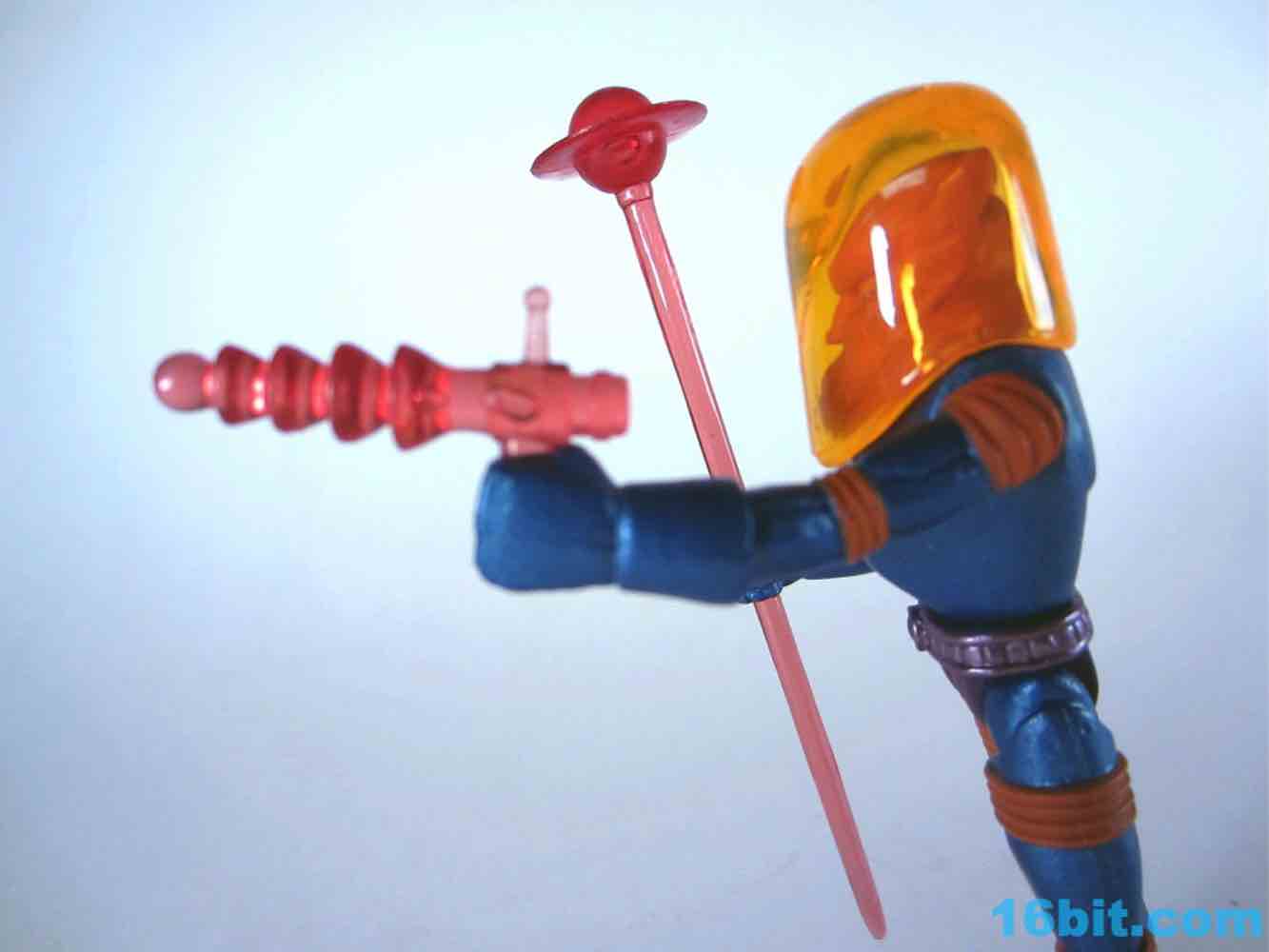 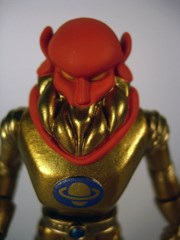 They all more or less share the same name, but the gold one - pictured above carded with the original name - was christened “Goldiac” by the creator, Mel Birnkrant.  He’s notable in that he has a beard that is painted a unique color that does not match his skin.   He’s Xodiac’s pop. 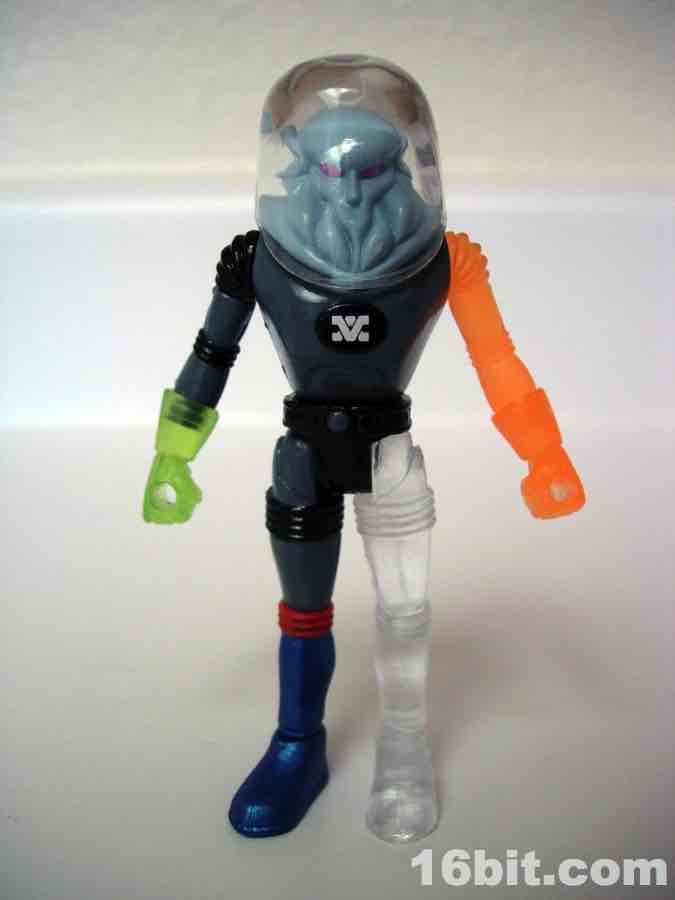 Also interesting, Xodiac’s weapon received a semi-late change before production in 2010.  The butt of the gun is actually a Glyos peg, whereas the mechanicals for it (seen here with the PMS colors: http://database.glyos.com/2011/08/xodiac-glyaxia-command.html) show it rounded off.

Now if you want my sentimental favorite, that’s Glyaxia Command Xodiac.  The Glyos people were kind enough to give me an early look at it at SDCC 2011, and I was kinda ridiculously giddy to have it.   The figure also sold out almost immediately - not unusual for an Onell Design drop, as they cultivated a fanbase who shows up on time to buy.  Just tell them where to go, they’ll be there.
Anyway - Xodiac got a lady friend, the horrifying Horroscope, in 2013 and 2014.  The head looks more like  triple-eyed Cthulhu, with tremendous breasts and a booty to match - just like you want from the alien space creature of your nightmares, envisioned through the prism of Harvey Kurtzman’s cartooning.   She only got three figures - a clear purple one, a White Star one, and the fully-painted one.  I kind of hope they do more. 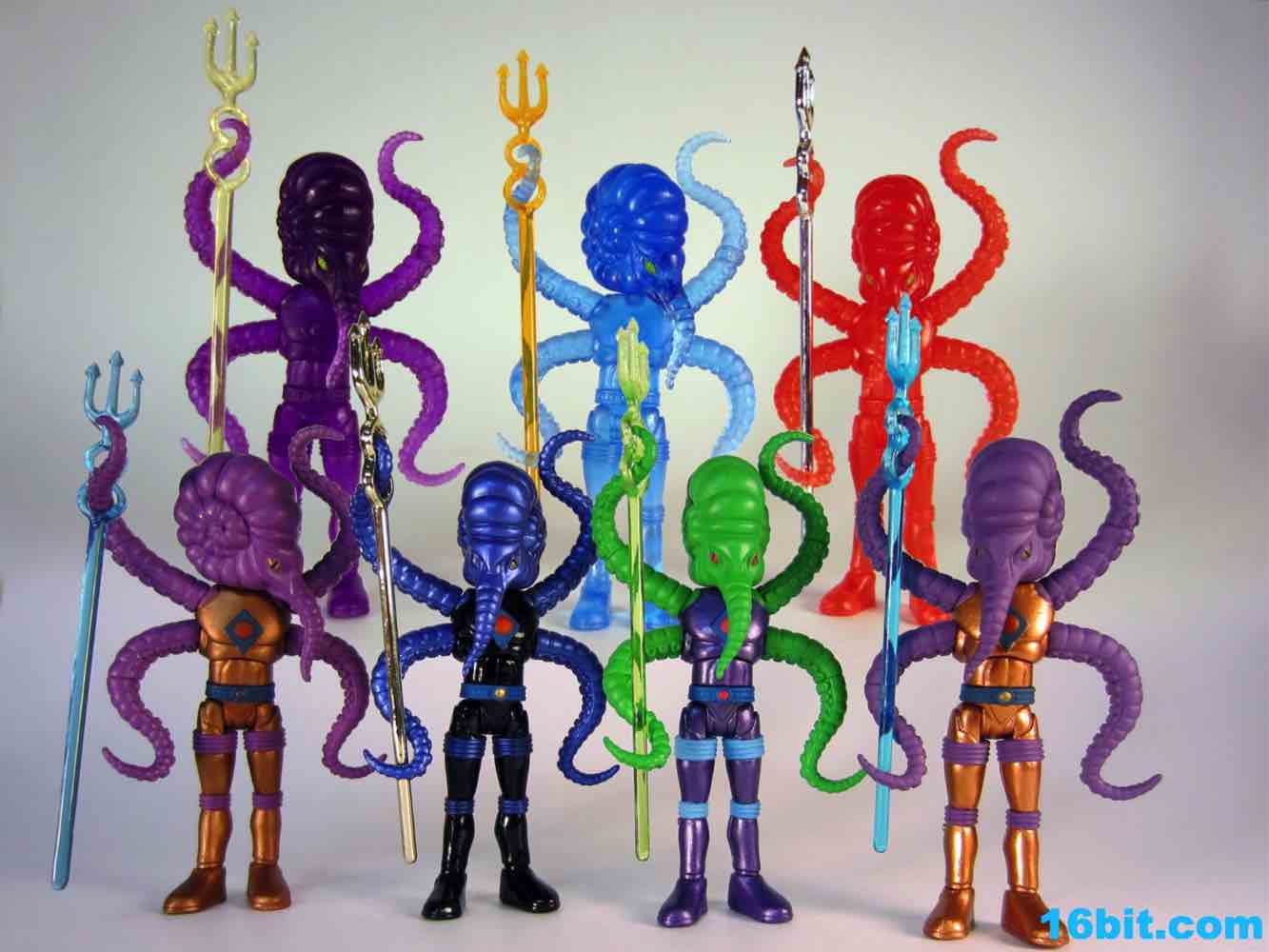 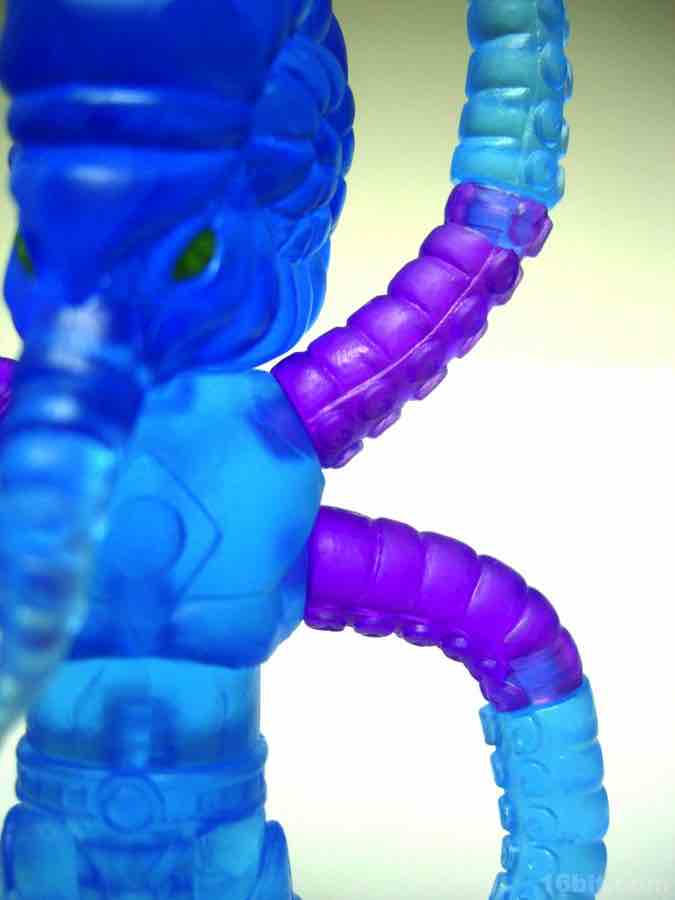 More Outer Space Men!  I haven’t done an updated complete group shot in a while - maybe I will if we get another Astro-Nautilus - but these shots cover the major bases.  The four-armed creature from a planet associated with a god of the sea, Astro-Nautilus was one of the most memorable figures from the original line-up.   If you saw pictures of the original bendable toys, you didn’t forget this one.

Each tentacle on the 3 3/4-inch scale alien is two pieces, and each leg is three.  The pieces all rotate and allow for mixing and matching.  The designer Mel Birnkrant incorporated a couple of loops on the staff, allowing a tentacle to slither through on the giant 1960s bendy figure as well as the modern action figures pictured above. 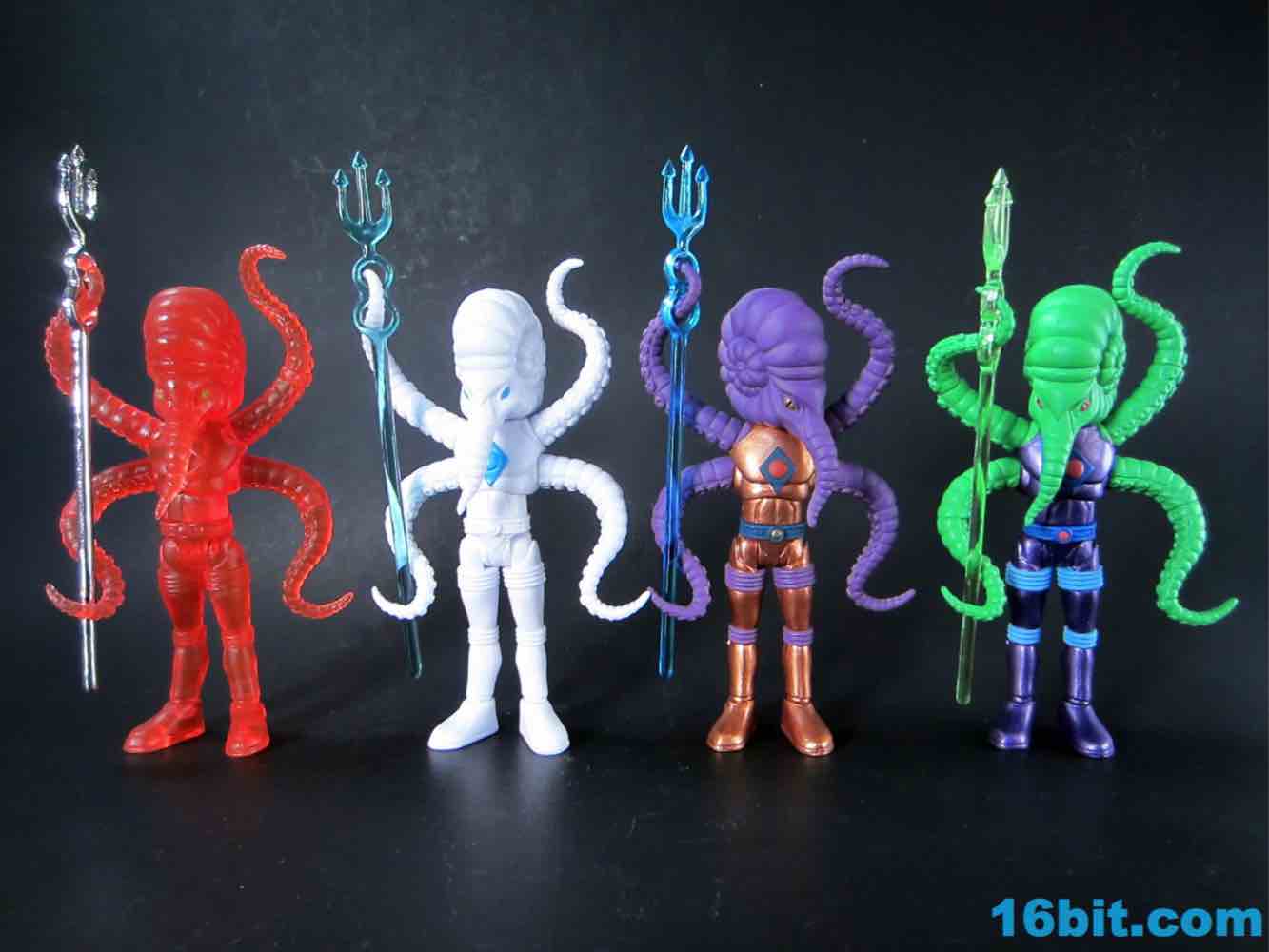 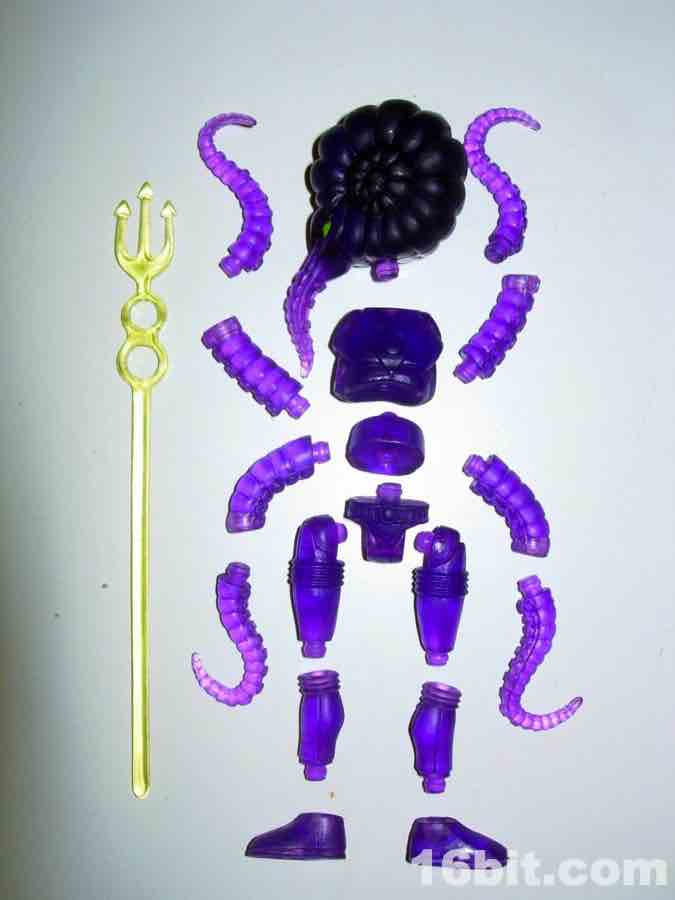 Like many figures, many Outer Space Men from the modern incarnation are more popular (and tougher to find now) in their “regular” incarnations, with the lower-run, often 300-piece exclusives slowly declining in price while their painted peers go up. Later waves are particularly pricey now, and from the look of things this week’s new Orbitron Diversus edition might be as low as 100 pieces.  (We don't know, but it sold fast.)

What’s really amazing was the price range on these guys.  Most of them started at $10 - a  bargain!  As time went on, prices went up.  The largely unadorned white one was part of a big boxed set of 8 figures for $115, which makes it a little over $14.   The black suit one was sold first at a gallery show I was at for $125  with an art print and only 4 figures, or about $30 depending on what value you put on the art print. 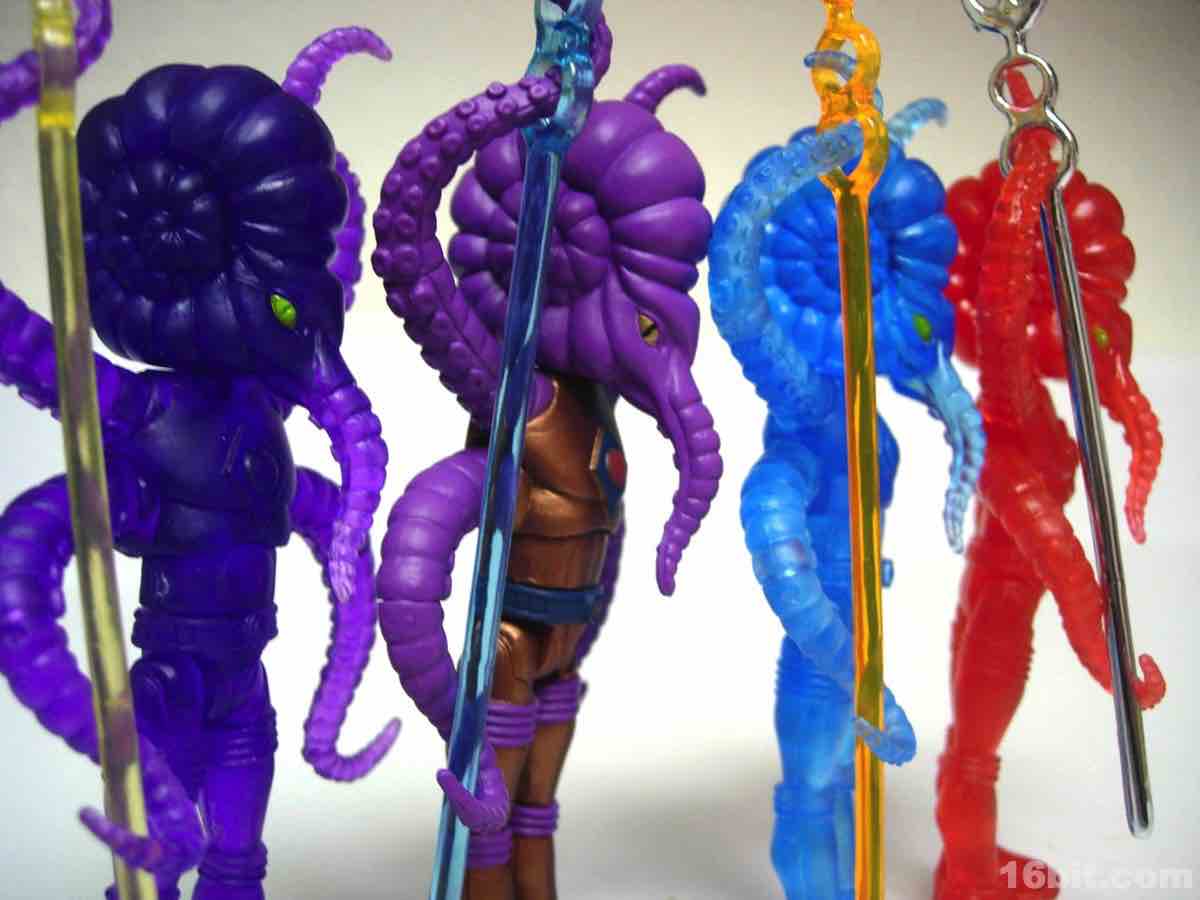 I took the above photos in numerous places for several reviews over many years, and they’re pretty inconsistent.  However, you’ve now seen every modern era Astro-Nautilus save for the gold staff variant of the red one, which I do not have.  If you like space toys whose designs largely hail prior to the moon landing, these are some you should absolutely look up - along with the Marx Mystery Ship and of course Mattel’s own Major Matt Mason.  After the moon landing, space toys were a tough sell without a major media tie-in.   Thanks for nothing, New Frontier. 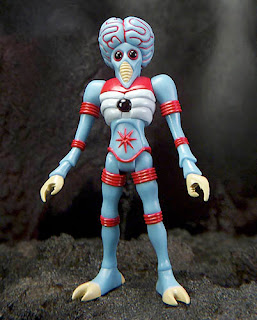 The Onell Design Store has the latest Outer Space Man - it's been a while!  The Orbitron Diversus has 2 weapons and is, as I type this, almost sold out.  It's colored a lot like the Metaluna Mutant from This Island Earth, and it's awesome.  So awesome.  And $18.   And fast on track to selling out.

Click here to see if the shop is up, and if any are left.
Posted by Adam16bit at 6:38 PM No comments: