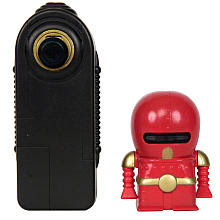 The Outer Space Men have some unusual names, but apparently they're not too unusual for another company to borrow. Senario makes a toy robot line called Zibits, and they're about $9.99 a pop. Each is a remote controller robot that's about two-inches tall. I saw these at Kmart earlier in the week and again at Toys R Us today, and felt obligated to share with you, the six or seven people who read this.

For the ultra-curious, the cardbacks of Zibits show a gold Alpha 7, but the toy is actually red.

BUT WAIT, THERE'S MORE: Thanks to the great Mel Birnkrant, we got this information:

"...the issue of the Alpha Seven name being used by Senarlo. Gary has been on top of this from the get-go. A search on Google will disclose and verify, that he filed legal action against Senario officially in January. But I believe he was in communication with them before that. Gary writes me today:

'The pieces that made it out with our name on it were very few and Amazon pulled them. I guess that Toys r us grabbed some. As you can see here:
http://www.senario.com/products_zibits.html
they changed the name of the toy real fast.'"

In case you're reading this in the distant future and that Senario page may have been changed again, the aforementioned Zibits Alpha 7 has been renamed "Epsilon."
Posted by Adam16bit at 3:15 PM No comments:

Email ThisBlogThis!Share to TwitterShare to FacebookShare to Pinterest
Labels: Trademarks 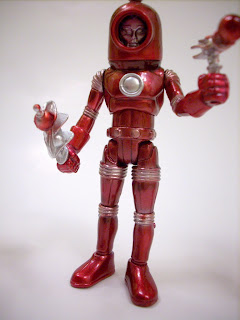 Reader Seth sent us a link to his blog, which features a series of revised Metamorpho figures. There's a nifty deep red version pictured, plus you can see some close-ups of his otherworldly head repaints on his blog The Man Purse.
Posted by Adam16bit at 3:21 PM No comments: 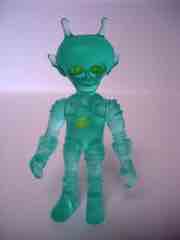 While the first batch of 2010 Outer Space Men figures had only one figure with a helmet, the 2011 quartet is loaded with them. Alpha 7 is a translucent greenish/bluish figure capped off with an ABS plastic helmet and gun in matching clear purple. The accessory fits quite securely, removing it from his head for the first time may prove challenging so be careful-- but be prepared to apply some force to it.
[ READ THE FULL REVIEW ]
Posted by Adam16bit at 9:09 AM No comments:

From 16bit.com: Here's a surprise from 16bit labs! We discovered new Clone Wars Mini-Vehicles have weapons which can connect to Glyos creations. if you have Buildmen or Pheyden or other similar releases, they can hold these weapons in their fists or can connect them to an arm or head joint. Due to the smaller fist size, Outer Space Men can use them as limbs, but not as handheld weapons. For more, click here for a gallery and additional information.
Posted by Adam16bit at 1:13 AM 3 comments:

..in accordance of the bylaws of this site, the OSM News coverage is actually over at 16bit.com this time around. Of note: new figures, a rough timetable for a new shipdate, and a new, fully-painted Xodiac variant is on the horizon.

Pictured is the Onell Design exclusive Glyaxian Xodiac, due in August.

You may also be interested in the Onell Design booth which had some neat stuff, including Japanese packaging for Glyos that's as fascinating as it is colorful.
Posted by Adam16bit at 10:49 PM No comments:

A quick note as I slowly unpack from San Diego-- the 2011 Alpha Wave for Comic-Con is slightly different from previous sets. For example, Electron+ and Mystron do not include alternate arms-- they each have one set. Also, a few Alpha 7s have been sold with slightly incomplete packaging. The set I picked up was missing the header card, which was added later in the show. If you pick up some from an eBay seller, it's possible he may be missing the card.
Posted by Adam16bit at 10:17 PM No comments:

Meet The Man From Uranus 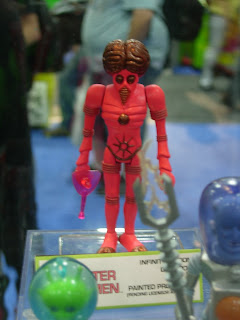 Orbitron was revealed at Comic-Con International today, bringing the man from Uranus to your... home. The figure uses the always-awesome Glyos construction, and we have other images to share too-- but I'm tired and have a lot of stuff to do, so have this for now.
Posted by Adam16bit at 10:51 PM No comments: 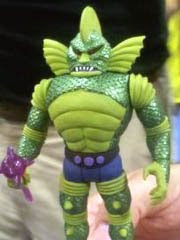 Twitter user and all-around cool guy Paul Nicholasi posted the first-ever shot of the new Colossus Rex figure from the Four Horsemen's Outer Space Men line. Presumably, this figure will be sold next year. Click here for the image, and click here to follow him on Twitter.
Posted by Adam16bit at 3:26 PM No comments: Designer Mel Birnkrant added several new head concepts to his online sketchbook. I particularly love the idea of Matt Meteor (pictured), an alternate to Commander Comet based on the real-life head of the super-cool dude and Glyos patriarch Matt Doughty from Onell Designs. (Be sure to say hi to him at Comic-Con, I plan to. Nice guy, good talent.) Another really slick design is an inverted Electron+, where the head is basically a clear solid helmet with an empty place where the head goes. It's really mind-blowingly neat to consider and I can't imagine another line that pulled this off, it's a really great idea and I hope these-- and the other new designs-- see production.
Posted by Adam16bit at 11:12 AM No comments: 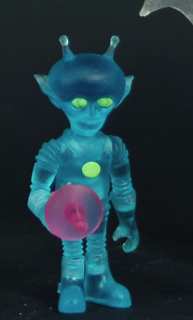 As promised, the pre-orders for the 2011 Comic-Con Alpha Wave figures are up now, complete with pictures of what they're calling "rough prototypes." I have to assume they're pretty darned close given you're going to pick them up in San Diego in about 3 weeks. As they have not immediately sold out, odds are they're not going to be quite the bear the 2010 series turned out to be, but you can order them now to skip the hassle of tracking them down at the convention (or going to the convention). The set is $40.00 before shipping.

UPDATE: Online allocation sold out on July 11, 2011. The bulk of the quantity should be on sale at Comic-Con next week.
Posted by Adam16bit at 6:45 PM 1 comment: