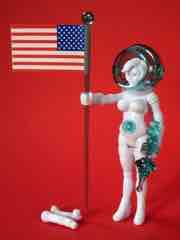 One of the first things I heard about the New York Comic Con release of Terra Firma was that her flag wasn't as awful as the San Diego Comic-Con release. The first thing I noticed was that the US flag has been trimmed of excess white, but the flag still seems to have the same adhesive problems which plagued the July version. On the bright side, everything else about the figure is pretty good.
[ READ THE FULL REVIEW ] 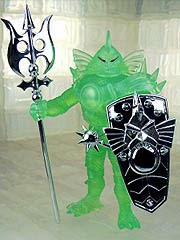 If you opted out of the customs for Galactic Holiday 2013 but lusted after the silver weapons, you're in luck!  This post at Source Horsemen confirms that they will be available for sale soon.

No price or release date was given.
Posted by Adam16bit at 7:19 PM No comments:

In case there was any doubt, the Infinity Edition of this year's six figures is moving ahead - it won't be here in time for Christmas, but this post shows packaging samples (with white figures inside) of Ohprometam, Jack Asteroid, Colossus Rex, Terra Firma, and Gamma X.  This completes the original 1960s character run, and may or may not conclude the new run - there are other characters on deck, so we'll probably know more in February. 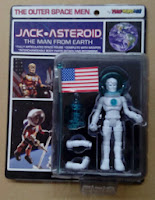 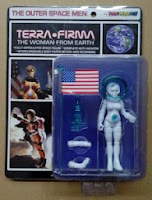 Click here to see more at Source Horsemen.
Posted by Adam16bit at 11:00 PM No comments: 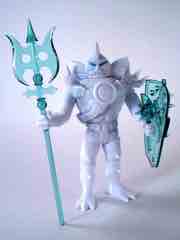 Bucking three years of tradition, the New York Comic Con release of Colossus Rex is solid white rather than a clear color - typically the Beta Phase figures have brought us colorful variations on the designs, but this year the Four Horsemen opted to continue their White Star program. I have to say that this is a great way for you to actually see the sculpted detail on these figures. The clear green absorbs a lot of the work, and obfuscates the problems too. While I dig the clear green figure, white Colossus Rex has some fishy fin details, nice pointy teeth, and tons of scales on his person. The removable armor is still here, and the fists are a bit more forgiving of holding his weapons.
[ READ THE FULL REVIEW ]

On December 10, at 3 PM EST, the 2013 Galactic Holiday action figures go on sale at Store Horsemen.  This year, they opted to do customs and according to the site, did a run of about 20 pieces - any over that order will be pre-orders and ship later.

While certainly an interesting twist, I do not collect custom figures.  It appears the Galactic Holiday figures may be redecorated SDCC 2013 Alpha Phase figures while the Ultras could be Beta Phase figures.  I will say this - the Ultra Ones look sharp.  If those were a regular mass-produced release, I'd totally buy a set.  Click here to see them on Source Horsemen.
Posted by Adam16bit at 12:07 PM No comments: 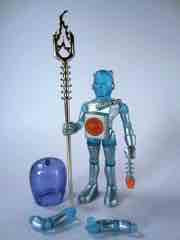 I was holding back on the other Outer Space Men Cosmic Creators Edition figure reviews so I could say "it sold out!" Well, it didn't yet - the long-delayed Fire and Ice Electron+ is a pretty gorgeous low-run figure (to the tune of 200 pieces) and you can still get it, if you want, in a fairly priced set. The line as a whole seems to have found its audience to be increasingly more selective, with very few non-Infinity Edition figures selling through a) in a timely manner and/or b) at full price. As a supporter of the line from the word "go," it's unfortunate to see that there's a strong possibility that each and every one of these figures were purchased by individuals who, like myself, are writing reviews for them. (Seriously, the ratio of the run to reviewers is pretty high.)
[ READ THE FULL REVIEW ]