It's time for finals! Already!   The great Mel Birnkrant reached out to the blog to say howdy and share links to dozens of new photos and stories about the upcoming and presumably close-to-final Outer Space Men action figures.

No word on release dates or upcoming prices, but for those of us itching for a closer and clearer look at these figures, well, it's certainly a great way to wrap up the week.  Check 'em out! 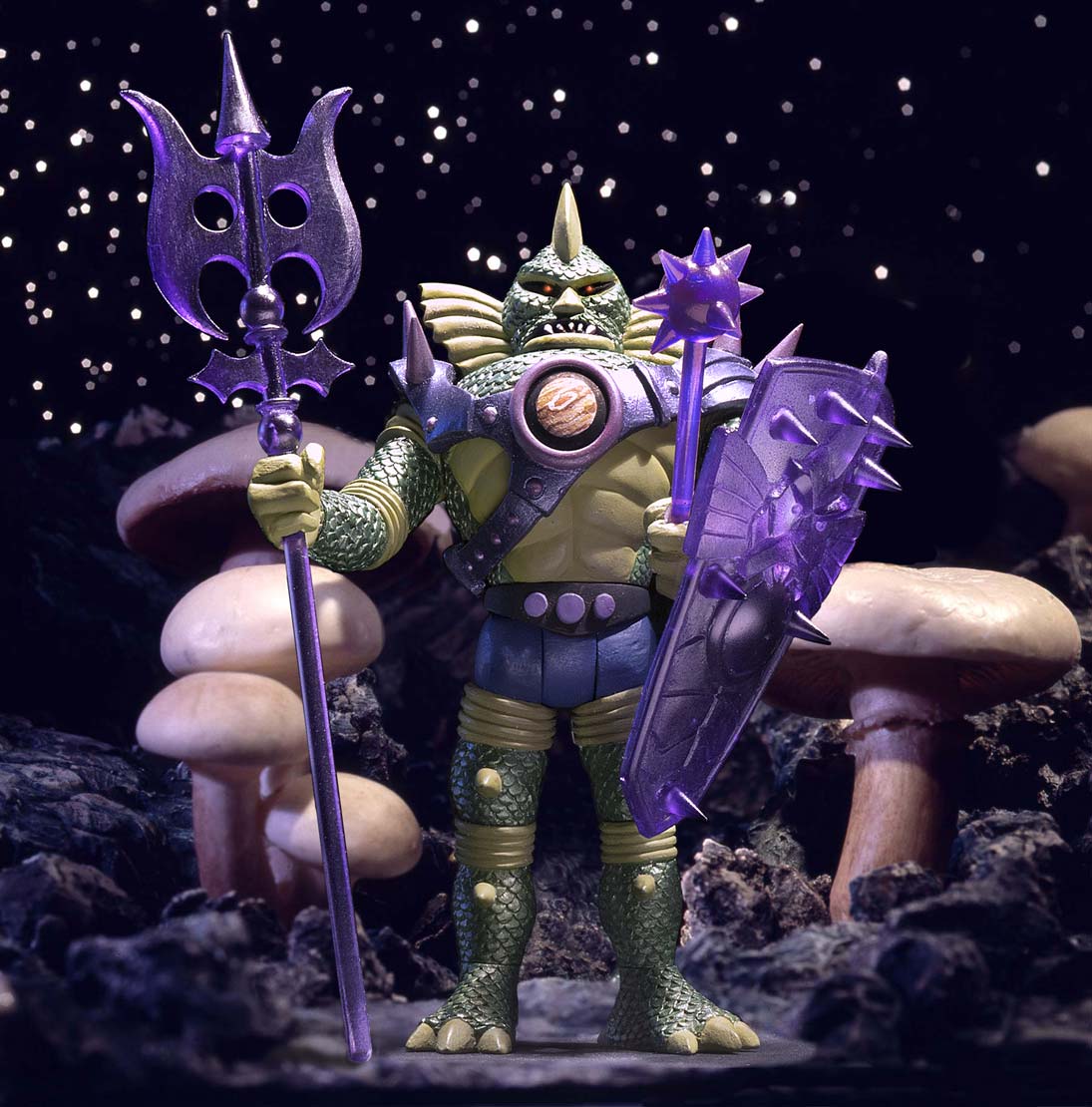 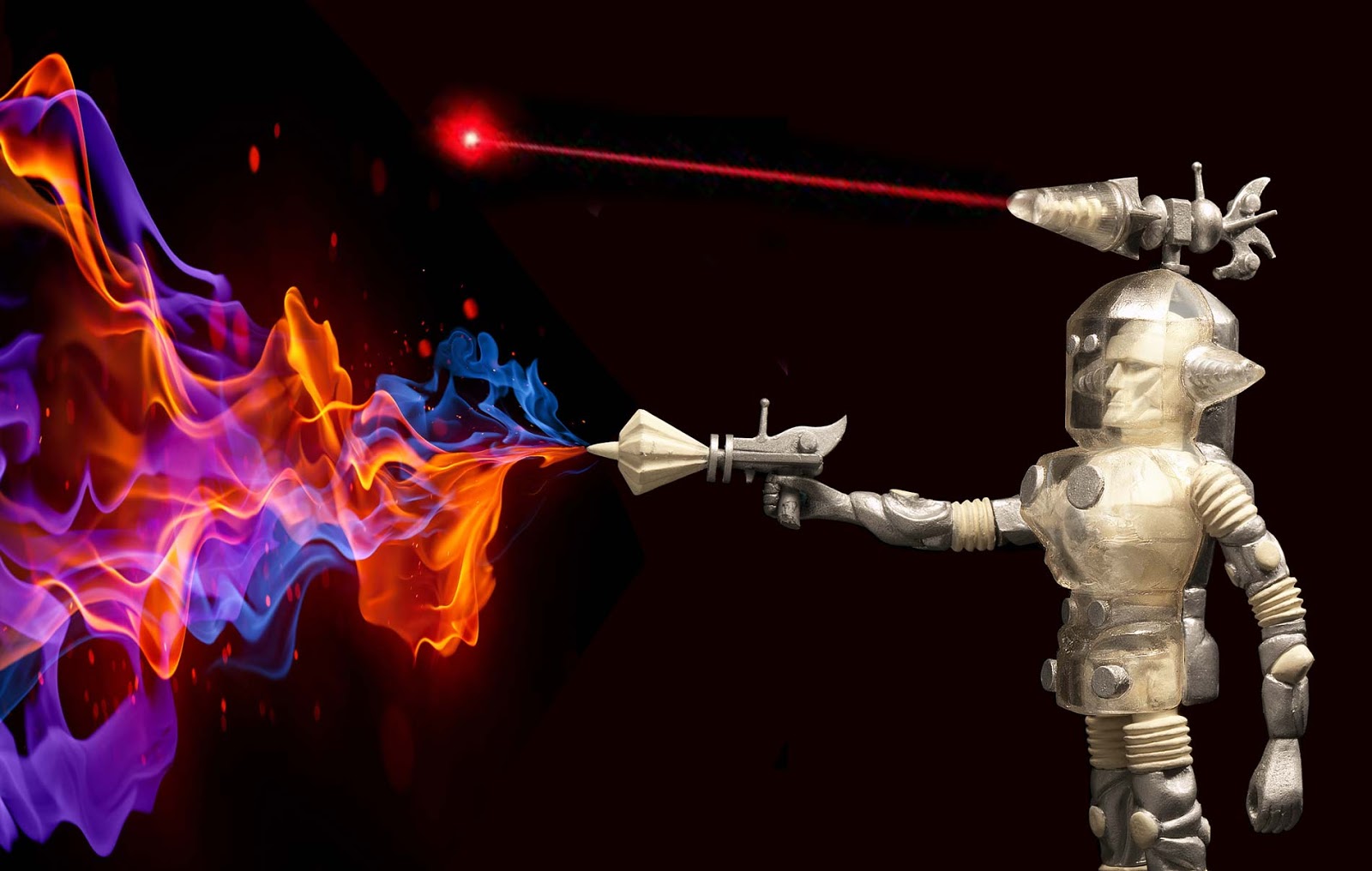 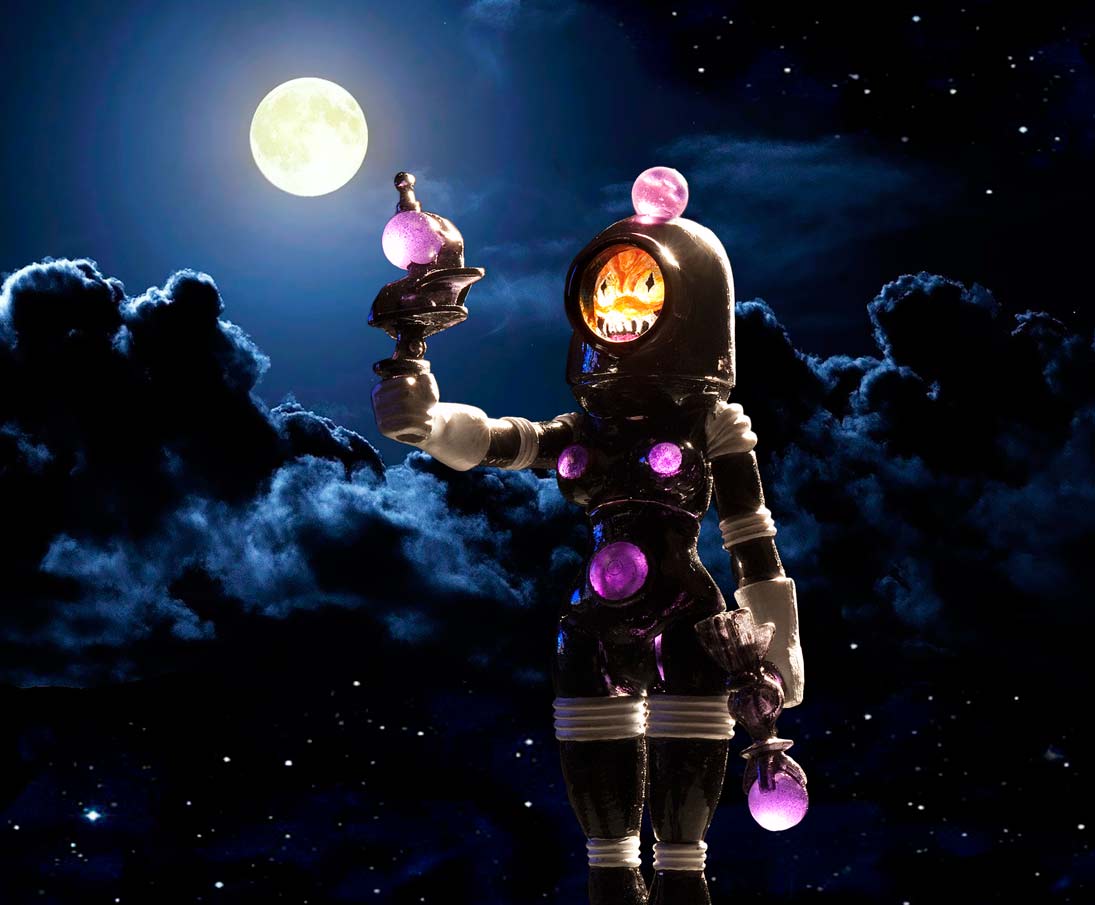 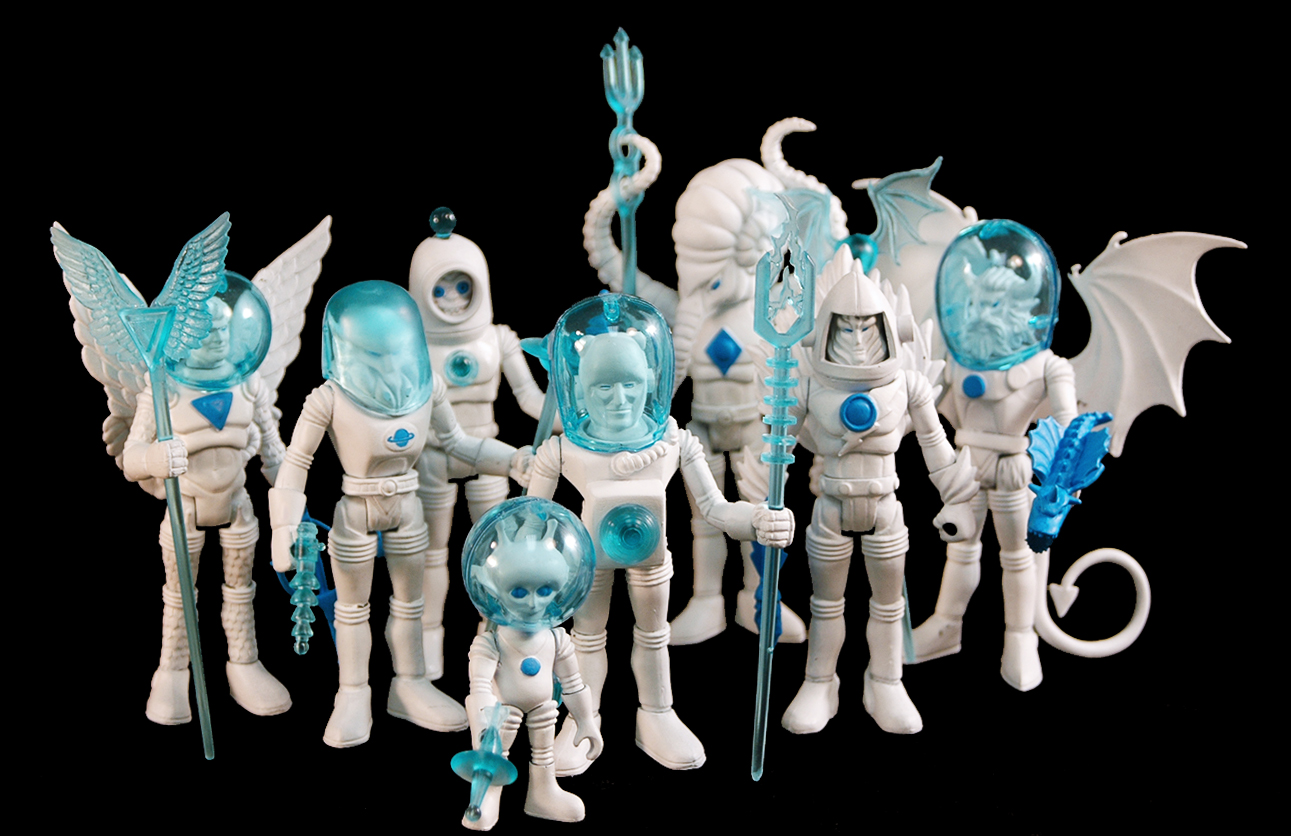 The Action Figure Xpress exclusive White Star Edition Outer Space Men Action Figures are up for pre-order as I type this. It's $114.99, same as at the show.

The set is one big box with 8 bagged figures inside.  Each figure is cast in white, unpainted plastic with a few blue highlights on eyes, weapons, and chest symbols.  Each figure has some clear blue element with the sole exception of Inferno.   Figures do not have any black splotches or unpainted white bits, as the previous images were mock-ups and not the final product.  They're pretty good - I have a set here and I'm still going through them, but they're basically exactly what you would hope for.
Posted by Adam16bit at 4:52 PM No comments: 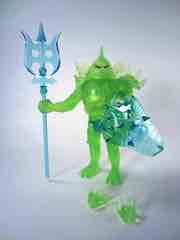 This figure was a long time coming - Colossus Rex was first shown, fully-painted, to the public at Comic-Con in July 2011. As of my writing this, I've been home from SDCC for mere hours and I just popped this figure open - and it's incredibly great, if you like this kind of thing. Based on the 1968 original design from Colorforms, this new figure comes packaged with Horroscope and Ohproatem in a box rather than in bags with header cards. Interestingly, my sets were swapped - the box showed the opposite set's characters on it instead, for both packs. As far as I know they're all like this so don't have a heart attack when you open the first box - it's probably the correct set.
[ READ THE FULL REVIEW ]


Note: there were a whopping 14 figures sold from this line at SDCC 2013.  We do not anticipate reviewing them all in the immediate future, so hang in there. 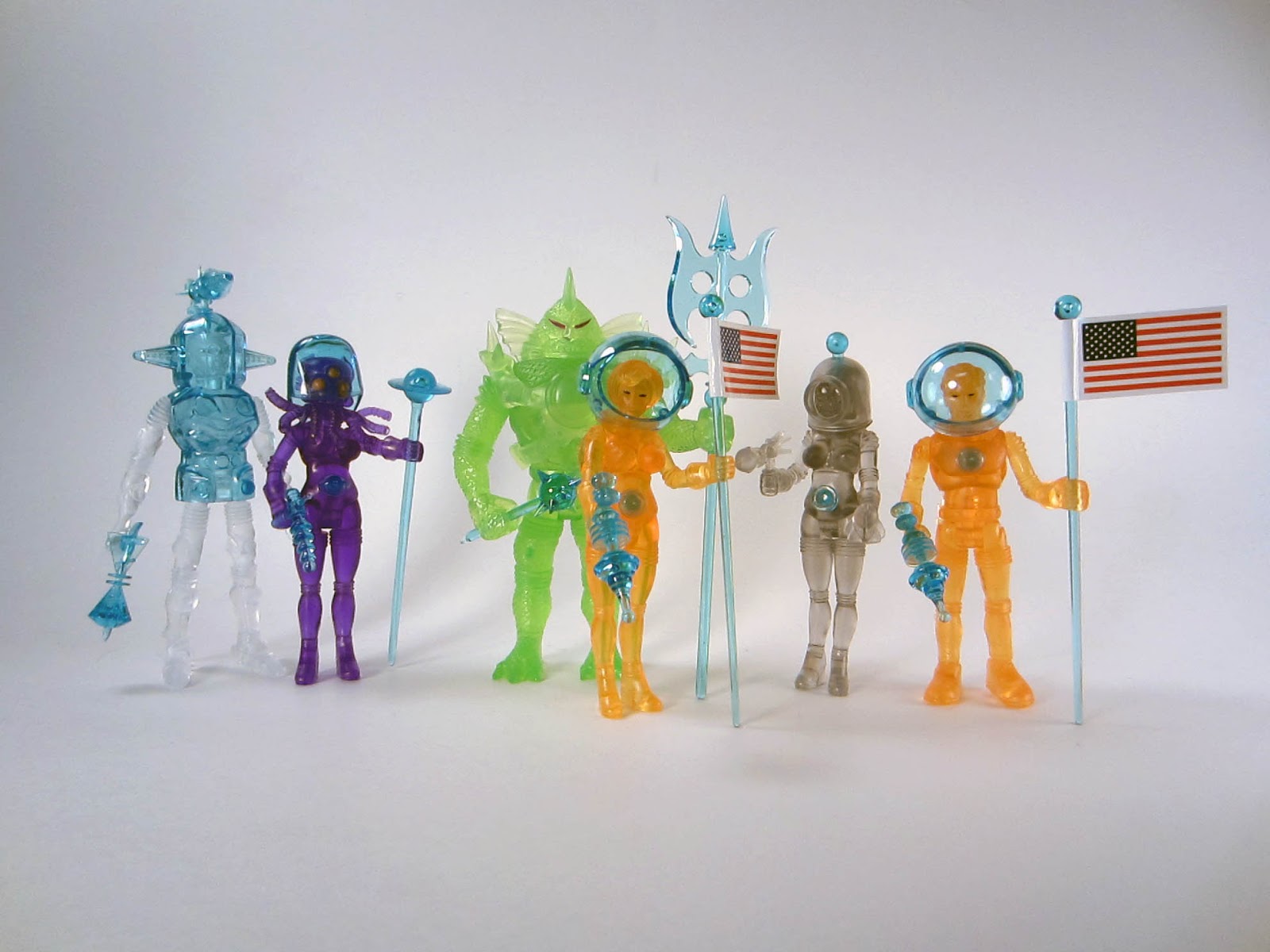 They made it! They weren't available until Friday, but the latest Outer Space Men did indeed show up and reviews will start popping up on this very blog this week - we're just getting back from the show so there's a lot to unpack.  Here's a quick rundown.

- The set of 6 was $120, making this the most expensive Alpha wave yet at $20 per figure.  Last year's was $50 for 3 figures, or $16.66 per figure.
- This was the first Alpha Phase to not come with any bagged figures with stapled header cards.  All came in sealed bags inside a small white box.
- The box has no individual figure names on the outside.
- The sets were mispackaged with my sample - the figures came in the opposing boxes.
- The flags are not well made. The stickers keep coming unglued - you can squeeze them together but they begin to separate.  Expect to reglue or replace them within a few months to a year.
- The Outer Space Women have difficulty standing due to their poses.
- The Outer Space Women cannot sit with their legs at a 90-degree angle.

Overall it's a nice wave - Colossus Rex is the clear winner (literally) and will be reviewed here on Tuesday.  Gamma-X is quite good, but cannot sit with his armor attached.  The Jack Asteroid and Terra Firma helmets are three-piece contraptions with flip-up visors.  Ohpramatem and Horroscope share a bunch of parts, and the transforming head gimmicks work great.  Horroscope has a two-piece head that separates at the tentacles. And I got work to do so more later.
Posted by Adam16bit at 10:15 PM No comments: 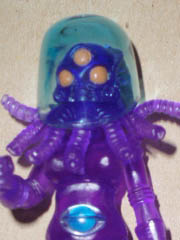 Update: The figures did not arrive on Thursday, and we were told to come back Friday. For the curious, I picked up my White Star set without a hitch.

After some delay, 6 new pictures and some news got posted to SourceHorsemen.com!   Horrorscope (pictured) looks great, and due to a delay the figures are expected to go on sale after noon on Thursday (today).  I of course shall be there.

Click here to see everything.
Posted by Adam16bit at 12:42 AM No comments:

Hey kids - the San Diego Comic-Con Action Figure Xpress Outer Space Men White Star Action Figure Set invoices started going out over the weekend, and this is required for at-show pick-up for the figures.  If you haven't already printed yours out, or checked your email, you may wish to do so. 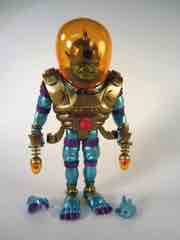 The Outer Space Men line has been on a pretty level trajectory since its start in 2010, with figures basically meeting expectations as to what you get for your $10 $12.50 $13-$26. As the first "deluxe" sized creature in this line, Cyclops is a massive, impressive, exquisitely detailed action figure. But is it worth $26 next to his $13ish siblings? That's debatable, but it's still the best space cyclops you'll ever see. It's like a monster out of The 7th Voyage of Sinbad, only, you know, blue. And not vaguely hairy.
[ READ THE FULL REVIEW ]