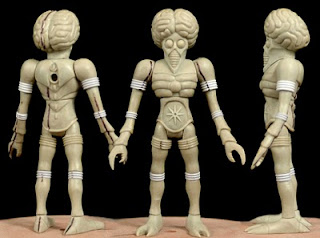 Over on The Four Horsemen's Fantastic Exclusive Forums you can find the very first pictures of the presumably final sculpt of Orbitron, the Man from Uranus.

It's a slightly different sculpt than the one shown at Comic-Con in San Diego last July, better and funkier. The hands are open claws, as opposed to the closed fists most of the figures have. There's also a waist joint, and the posting makes confirmation of a 14th "Space Man," which could well be Pheyden from the Glyos line or something completely new-- or one of those swell head variants they've been teasing over the past few months! I'm looking forward to it.
Posted by Adam16bit at 9:37 PM